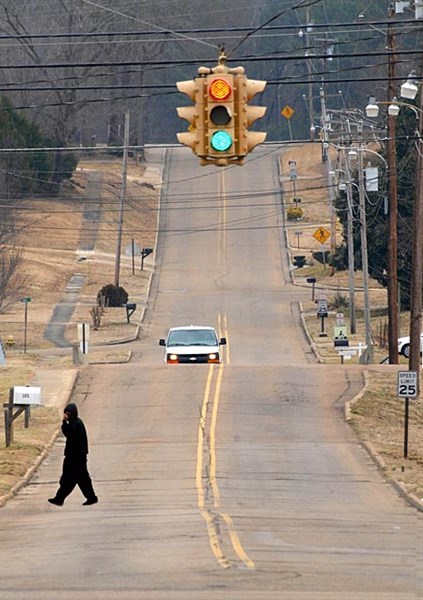 It might not look busy all the time, but the intersection of Central and North Court is a beehive of activity before and after school at Davidson Elementary. – Photo by Jack Gurner 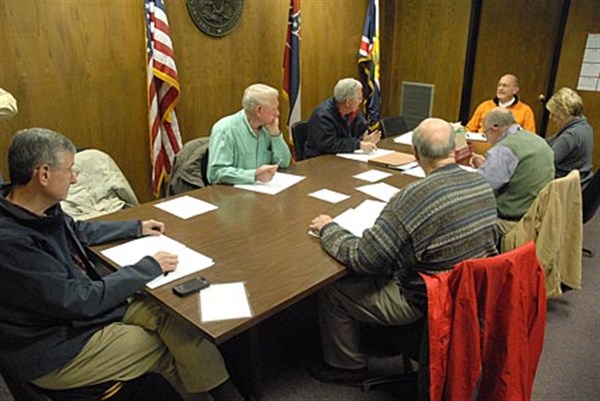 The Mayor explains the sewer project progress to aldermen. – Photo by Jack Gurner


WATER VALLEY – Alderman Larry Bell wants to change the way the city’s signal lights control traffic.
The ward four alderman said at the Feb. 4 meeting that everybody complains about the north end light located at the intersection of Central and North Court Streets. “The chief (referring to Water Valley Police Chief Mike King) circles around so he doesn’t have to go through it,” Bell commented.
What Bell is recommending is setting the lights to flash red so that traffic can stop and go. He described seeing that technique used in Grenada at intersections along Hwy. 51 and Hwy. 8. “I would be for leaving the Baptist Church red light like it is,” he said.
Bell noted that he had discussed the lights with Mayor Larry Hart. “I know that Larry is not for it that much. But, still I think it is worth a try. Especially the one on the north end by the park and the one down at Martin Street.”
Mayor Hart said that he and Bell had discussed the issue. “I have talked to Chief King about it and he has agreed to study the one at North Court.”
The mayor emphasized that the intersection is used by traffic coming from Davidson Elementary School. “We can at least look at it,” Mayor Hart said, “and see what we think about that one.”
He also pointed out that the traffic lights at the Main Street, Blackmur Drive and Panola Street intersections were installed by MDOT and are under their control. “Let’s just do the study first and then we’ll get into it,” said Hart.
Bell responded that he thought the only way to do a study would be to try it for a week or so and see how people like it.
“However the chief wants to do it would be fine,” Hart said and turned to Chief King. “You’ll be reporting back to us.”
Bell said, “I think the chief knows like I do that when you come down Central Street you are going to catch that one 90 times out of a hundred. There ain’t no way to miss it.”
“And, I think the Panola Street light would be better blinking, too,” Bell said in what appeared to be a joking reference to an intersection used frequently by the mayor.


WATER VALLEY – A little dry weather is needed for completion of the half-million dollar project to run a new sewer line from just below Town Creek to the parking lot at Church and Duncan Streets.
“The sewer project is waiting for some drying,” Mayor Larry Hart told aldermen at their meeting Feb. 4. “About all they lack is prettying up their cuts and putting the asphalt back in,” he said. “Got one test we’ve got to make down on Dupuy Street before that work is wrapped up. They’re very close to being done.”
The mayor also pointed out the “gash” in the City Hall parking lot, referring to the long strip of concrete that had to be removed. He said that the water and sewer department had been working on a broken sewer line between the El Charrito Mexican restaurant and Blackmur Drive.
Among other actions at the February first Tuesday meeting, aldermen:
• Heard from Mayor Hart that electric department lineman Brandon Richardson, who was injured by a falling limb, was at home and “doing alright.”
• Received a report from Water Valley Main Street Director Mickey Howley, who commented on the movie “Forced Move” which is scheduled to be filmed in the area beginning at the end of March and into April.
He added that Water Valley was to be featured in another production, this one a documentary on Mississippi’s creative economy. The Valley was one of three towns picked for the film, which will include segments shot in Cleveland and Hernando.
Howley also thanked the board members for their role in getting the town on the National Register of Historic Places by supporting the Main Street effort. He noted that being on the register was one of the reasons that helped make restoration of the old Blu-Buck buildings possible. “Thank you for the foresight on that and the support,” he added.
Finally, he reminded aldermen that the BTC Cookbook, published by Random House, would be coming out in mid-March. The book, by BTC owner Alexe van Beuren with recipes by Chef Dixie Grimes, has a scheduled publication date of March 18.
• Accepted culvert bids from Advanced Drainage Systems for the plastic culverts, G & O Supply for the metal and Hanson Pipe for the concrete based on recommendations from City Clerk Vivian Snider.
• Entered into the minutes the state bid price for asphalt from Lehman-Roberts at $92.40 to $95.40 per ton delivered and laid in.
• Were informed that the Presidents Day holiday would be observed Feb. 17 by city employees.