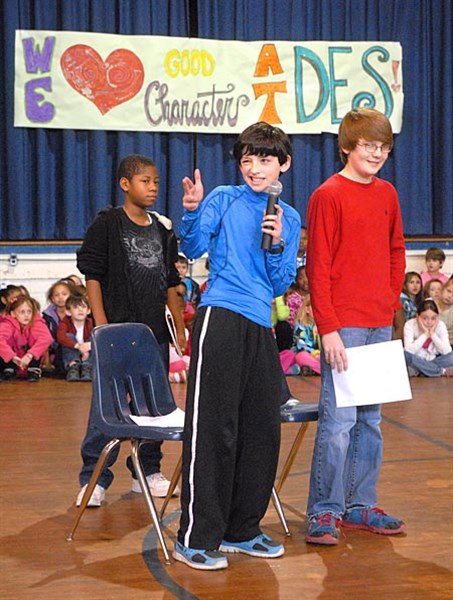 Character Counts For School Kids – Davidson Elementary School held their character program last Friday. Later, 6th grade students (from left) Mario Davis, Brett Bain and Coulter Clement participated in the Good Character Game Show. Brett was asked what he liked best about DES and he answered, “I like the hot Ole Miss student teachers.” Apparently the term “character” describes some of the students as well. – Photos by Jack Gurner 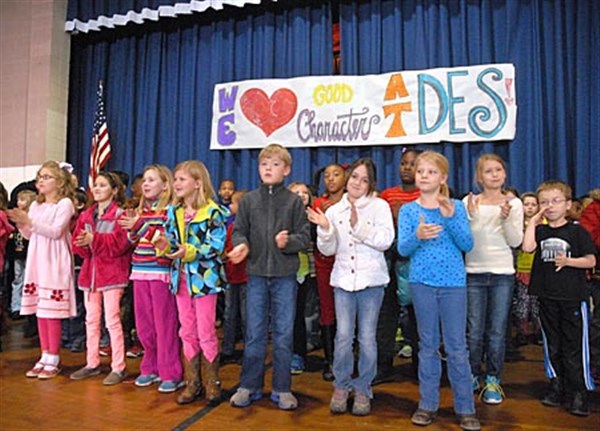 The DES 2nd grade students sang their school song (above and below). 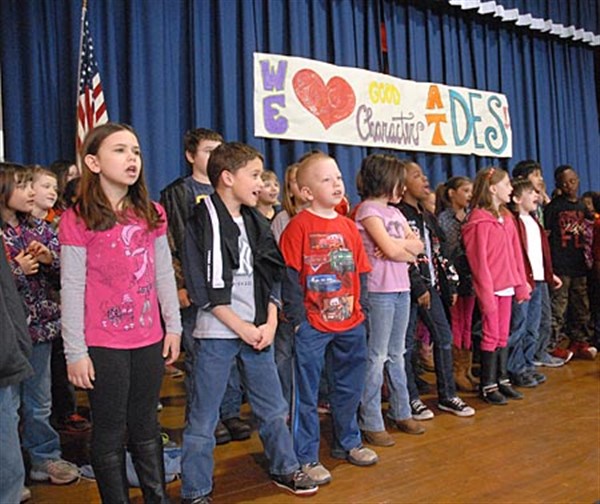 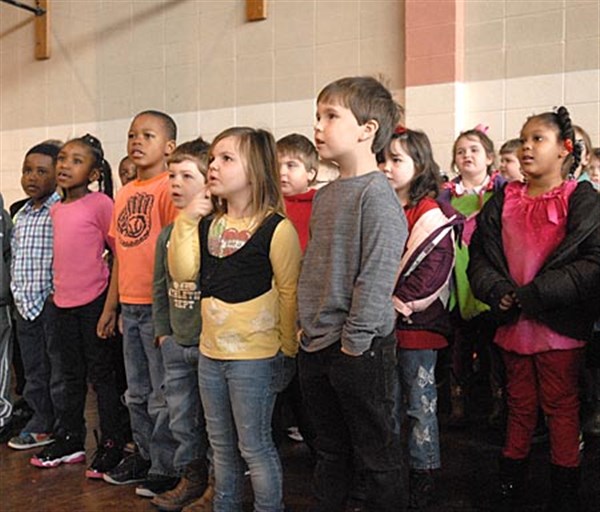 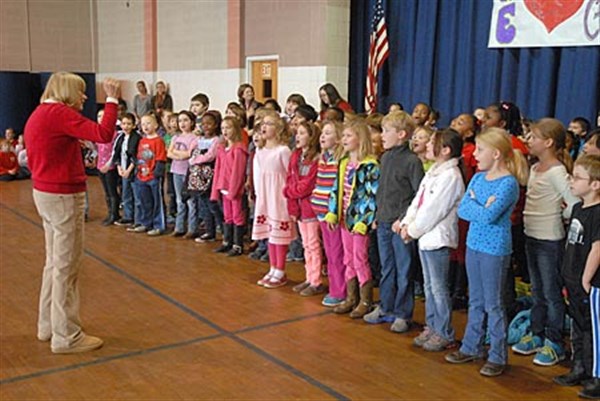 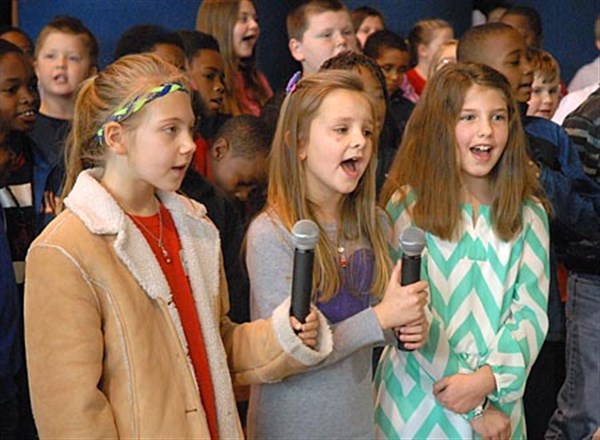 “Bully No More” sung by the 3rd grade trio (from left to right) Maris Lindsey, Chloe Clement, and Maggie Ward. 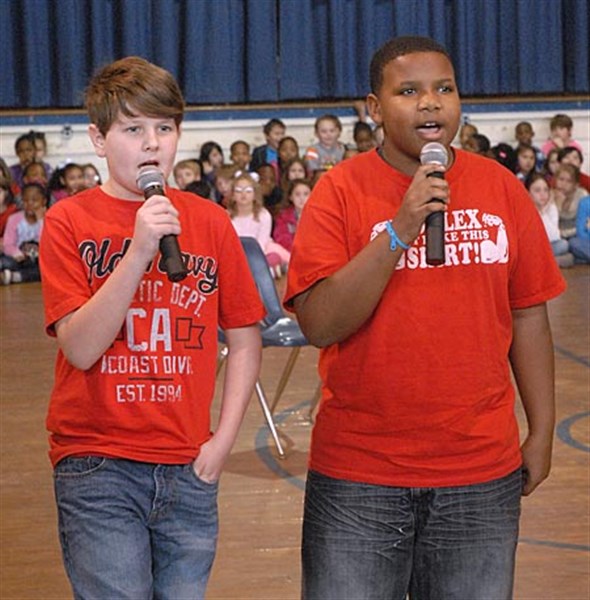 Singing a duet were 5th graders Zack Martin and Xavier Hairston. The song was “I Think I Will Think Twice Next Time.” 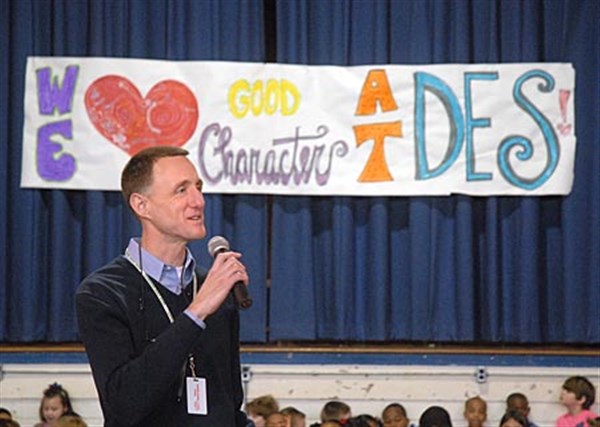 DES Principal Glenn Kitchens thanked the students for participating and the parents and friends for coming to see the program.

Mary Freeman animatedly directed the 4th graders as they sang the title song, “Character.” Shamya Blackmon was soloist. The program is part of the Positive Behavior Intervention and Supports (PBIS) program that strives to develop good character in the students.


WATER VALLEY – The school district will save taxpayers about $12,000 on roof repairs at Davidson Elementary School by doing the whole project at one time.
“We have two options,” Superintendent Kim Chrestman explained to district trustees at their meeting Monday night. “We can do just the section that is leaking or we can do the whole 5th and 6th grade building.”
After some quick calculations, trustee Pierce Epes said that it would save about $.90 per square foot to do the entire roof. “I’m concerned that we are going to end up having more damage to the building if we don’t fix it. If we don’t get it fixed and taken care of, it is going to cost us more later.”
Trustees agreed they had rather fix the roof than to patch it a little at a time at a greater cost.
Board members voted to accept a bid of about $50,000 from Marchbanks Specialities for the work.
Among other actions at the Feb. 17 meeting, trustees:
• Received Certificates of Appreciation from the Mississippi School Board Association in honor of School Board Recognition Week.
School Board President Lamar Burgess responded by saying that it is an honor to serve on the board.
• Heard the financial report from District Business Manager Randy Goodwin and then approved claims.
• Received a reminder from the superintendent during his report that there is less than two weeks of school before spring break. “Having not been out much lately, they are all ready for some warmer weather,” he said.
He added that the Future Problem Solving Team will compete in the State Competition in Jackson Feb. 27-28th.  The WVHS team are the 2013 State Champions.  Their sponsor is Keli Lindsey.
The full text of Super-intendent Chrestman’s re-port will be included with this story on the Herald’s website: www.yalnews.com.
• Heard from board trustee Casey Washington who told the board of his experiences talking with state legislators, particularly those on the education committees. Washington expressed his concerns over two bills: one would allow students to cross district lines to leave a failing school and the other would consolidate the administrative functions of certain districts in the state (the Water Valley and Coffeeville districts were originally on the list).
Washington said that he spoke with Rep. Brad Mayo of Oxford, who sponsored the bill to consolidate the districts, and explained to him that he (Mayo) didn’t understand what was going on in Yalobusha County. He said that Mayo believes that consolidating districts would save money.
Washington said that he reminded the Oxford representative that the Oxford and Lafayette districts were less than five miles apart. Mayo countered, saying Water Valley is a D-rated district to which Washington responded, “Now we’re not talking about money.”
Washington said that during his conversations with legislators, he explained that they should visit districts around the state and learn more first-hand about their problems. And, they should “pony up” the money needed to improve schools.
Washington said he spent an eight-hour day talking on the phone with the legislators and added that he was on-board with consolidation as long as it was done fairly across the entire 82 counties of the state.
Trustee Taylor Trusty joined the conversation and told his fellow board members, “Our fate is in our own hands.”
“If we want these problems to go away, we need to quit being a D-rated district,” said Trusty.


Davidson Elementary School is a very busy place.  Students have completed their second round of Acuity testing and their first round of Renaissance STAR Reader testing.  Students are enjoying the AR program and their teachers are very excited about the information regarding student progress that they receive from both of these programs.  This information helps teachers to make the very best instructional decisions possible.

This past Friday our students enjoyed the annual Character Program.  Thanks to Ms. Mary Freeman for coordinating this fine program.  The students at Davidson are routinely involved in activities that encourage and support the building of good character with students throughout the Davidson campus and our goal is to have a demonstration of good character from every individual on the campus at all times.

2nd grade Davidson students will enjoy a second trip to the Orpheum Theater in Memphis, Tennessee to take in a performance later this week thanks to a generous grant.  Ms. Christi Lowery coordinated this effort and all second grade teachers are to be commended for working with Ms. Lowery to see this process through.  For many of the students it will truly be a once in a lifetime experience and for some it may even offer them a crystalizing experience that will affect their futures in many positive ways.

Progress reports went home a little over a week ago and these reports helped parents and teachers to reflect on student progress and inform instructional decisions as we move into the second half of the third quarter of our school year.

DES would like to thank Ms. Jency Hill from WVHS for sharing with 3-6 grade math teachers during a recent Wednesday after school session. She covered a lot of information with these faculty members and opened a dialogue that hopefully will continue as we work toward moving our students to a higher performance level. We appreciate everything that everyone is doing to help us meet the needs of our students.

Spring Pictures are scheduled for March 5.  Spring, did we say spring, believe it or not there are only 14 more instructional days until students have spring break.  Having not been out much lately, they are all ready for some warmer weather.  Students love the outdoors and are ready for the opportunity to get out and enjoy.  Following which they will be back in their classrooms working hard to learn much and perform at a high level on their end-of-year assessments.