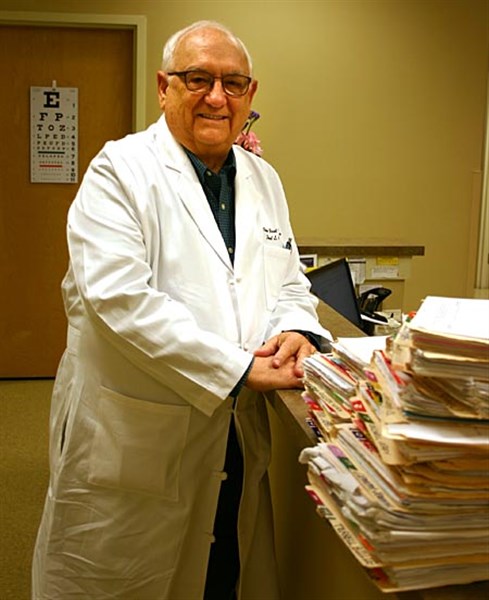 Dr. Paul Odom takes a short break from seeing patients Friday afternoon for an interview with the Herald. The paperwork on the counter attests to a busy office and a busy doctor. – Photo by David Howell


WATER VALLEY–He may not have fulfilled his family’s railroading career expectations, but after five decades of taking care of patients, his choice was the right one.
You see, Dr. Paul Odom’s career was mapped out when he was just a kid. His father, a career railroad man, and his boss, the state railroad superintendent of the northern portion of the state, decided young Paul would obtain a degree in electrical engineering and go to work for Illinois Central. His brother and brother-in-law were also railroad men and it was an obvious choice.
After a year pursuing that engineering curriculum, Odom changed course. He graduated from the University of Mississippi Medical School in 1963 and has been practicing medicine ever since – first working in a small town in Appalachia, then in Destin for almost a decade before settling in Water Valley.
“You would think that after 50 years I would be ready to quit, but I’m not,” Odom explains during an interview last week. “I still enjoy practicing medicine. The thought of going home and sitting and watching television is not appealing to me,” he added.
His enjoyment is evident in his work load–at 79 the local physician maintains a demanding schedule that includes serving as medical director for the VA hospital in Oxford and Yalobusha General’s nursing home, chief of staff at Yalobusha General Hospital, med control doctor for the hospital’s ambulance service and working at Odom Clinic Monday through Friday and some weekends.
Often it takes a 12-hour day to fulfill those expectations but it is a labor of love.
“I would like to stay here as long as I am healthy,” Odom said.

The Early Days
Odom was born in Jackson and raised in Tchula, but his first practice was far from either town.
After completing med school, Odom had secured a position as an X-ray doctor at a prominent New Orleans hospital. That changed when a doctor came through looking for doctors to serve in the Appalachian region. It was an area Odom had already pledged to serve.
“I had made a promise to the good Lord that if I could get through med school I would pull one year in Appalachia,” Odom said. “I remembered that promise.”
In 1965, Odom pulled into a small, Appalachia town that did not have a doctor, nurse or even a lawyer.  He rented a building and put out a shingle and it was a week before he saw his first patient as word slowly spread. Over time the clinic grew and Odom’s single year commitment turned into 13 years before he could find someone to take his place.
His next destination was on the opposite end of the spectrum from a small coal town in the Appalachians. He wanted to open a clinic Destin, Fla. Before he could practice in Florida, he needed a license and had to pass that exam.
This landed him in Water Valley as his brother, the one who worked for the railroad, lived in the Valley.
“So I worked here about a year or so. I passed the examination and moved to Destin,” Odom said. “At that time there was not a single doctor in the town,” he added.  He worked in Destin until 1988, as the community thrived.
“While I was down there, we got a new hospital going,” Odom added.

Coming Home
Recently prosperity has been the story for the county-owned hospital, but it hasn’t always been that way.
A shortage of doctors back in Water Valley led to Odom’s decision to return here in 1988 when he made the decision to leave Destin.
“The people who knew me before… got together and came down and asked me to come back,” Odom explained. “It appealed to me, I am a Mississippian first, and I agreed to do so,” Odom said.
“The hospital helped me get started and the rest is history,” Odom said.
While his description sounds short and sweet, that wasn’t exactly the case.
There were tough years between 1988 and the more recent prosperity the hospital has enjoyed. There was even years Odom refers to as the “dark years,” prompted by the shortage of physicians.
This shortage meant Odom worked long hours, nights and weekends seeing patients.
“Dr. Walker was unable to work due to his health. Dr. Spears had retired. Dr. Criss had retired and I was the only doctor in the county for about a year,” Odom said.
It was a long year, as Odom worked every day and every weekend.
“Those were the dark years,” he explained.
In addition to long hours for Odom, the dark years were also tough financially on the hospital.
“When I came here the hospital was not doing well,” Odom said.

Building A Strong Local Hospital
For a little hospital, this hospital has really advanced technically
Odom pointed to several former hospital board members –the late Smiley Arrington, Brownie Crawford and Linda Ingram– who took a strong hand in getting the hospital moving forward.
“From that day on we began to move,” Odom explained.
Next Odom pointed to a young administrator, an accountant by trade, who played a strong role in progressing the hospital.
“Terry Varner has been very good for this hospital community. We have gone from a stumbling, struggling hospital to a vibrant hospital,” Odom explained.
“We have moved out into Oakland and Coffeeville and have even looked at other areas we are going to expand to,” the veteran doctor also said.
“When I first came here we didn’t have CATSCANS in our hospital. We didn’t have MRIs. We didn’t have ultrasounds. Now we have all of it. For a little hospital, this hospital has really advanced technically,” Odom said.
Odom also said the current slate of doctors is a blessing for the hospital.
“We have Dr. Pratt and Dr. Hall,” he explained.
Also important are five nurse practitioners working for the hospital.
“That has been a big boost to our ability to serve the community, by adding those practitioners.  I can’t say enough about our nurse practitioners,” Odom said.
But with all the new equipment and facilities–the bottom line is the same as it was back in 1965 when Odom opened a clinic in the Appalachians–taking care of  patients.
“That my life, taking care of patients,” Odom said.
Yalobusha General Hospital Administrator Terry Varner knows firsthand about Odom’s dedication.
“Dr Odom has been such a comforting presence in our community. His genuine compassion for people is unsurpassed, and he has an incredible knowledge of medicine. It’s been a humbling experience to see all the years he has served our community. I am very proud to have the privilege of calling him my doctor and my friend,” Varner said.