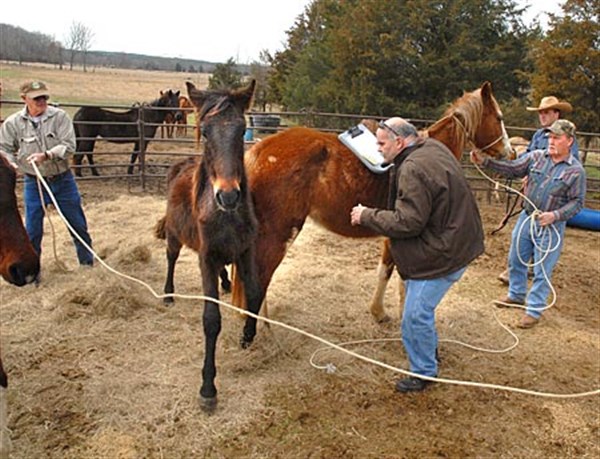 Veterinarian Dr. Tom Abernethy of Grenada (with clipboard) examines two of the 17 starving horses seized by authorities Tuesday from a pasture on County Road 56 in Sylva Rena. – Photo by Jack Gurner 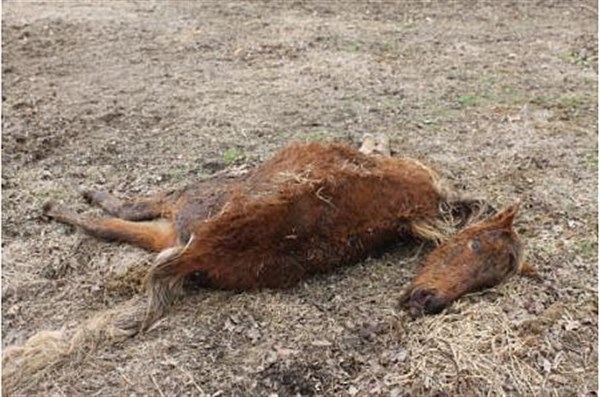 Carcasses from five horses have been discovered on the property. – Photos Provided 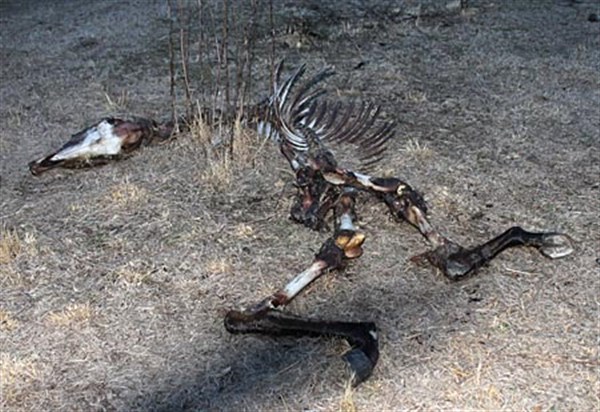 
SYLVA RENA – Seventeen starving horses were seized Tuesday morning and the owner could face criminal charges for neglect.
A neighbor reported the malnourished horses to the sheriff’s department almost three weeks ago and the case was turned over to In Defense of Animals (IDA), an international animal protection organization that is able to provide both immediate attention and long-term care for the horses.
Director of IDA’s Hope Animal Sanctuary Doll Stanley told the Herald there were originally 26 horses on the property back in November.
Stanley said the remains of five horses were accounted for on the property.
“The other four we’re not sure if he took them off someplace else or what. We will be reporting the owner to the Mississippi Board of Animal Health for not burying the carcasses,” she explained.
Since their discovery on County Road 56 in the Sylva Rena Community, IDA has been supplying the horses with quality hay. They are in need of a veterinary assessment and will have grain introduced into their diet under close supervision.
Tuesday morning a caravan of horse trailers and as many as 20 volunteers converged on the property to begin rounding up the animals. The volunteers, including eight from Mississippi Horse Rescue, assembled a portable coral and coaxed the horses in with fresh hay.
“Some of our friends brought their trailers…some of their friends brought theirs,” said Stanley. “A friend of mine, Kelly Vance Buck, is offering her property for most of them.”
A solemn-faced volunteer cowboy assessed the condition of the horses and they slowly walked passed him into the coral. “Frontier justice,” was his two-word comment.
Stanley continued: “We have to reach out to the public at this point. No rescue group we know of is in a position to take in 17 very needy horses. The number of calls we are receiving to aid with horses in need far exceeds our resources to respond. It’s maddening to know animals are desperate for assistance that just isn’t there.”
Stanley told the Herald that IDA has set up a fund strictly for this emergency and the ongoing care of the horses. It is expected that the costs will run into the thousands of dollars.
Sheriff department spokesperson Libby Kuchta told the Herald the call about the neglected horses came from a neighbor three weeks ago on one of the colder nights recorded this winter.
“The owner lives in Chicago, his brother was in charge of caring for the horses,” Kuchta told the Herald.
Kuchta also said deputies receive numerous animal-related calls each week. With neglect cases like the horses, Stanley is often contacted for help.
“She is the only person we have to help in these matters,” Kuchta explained. “Deputies aren’t equipped to nurses horses back to health,” Kuchta added.