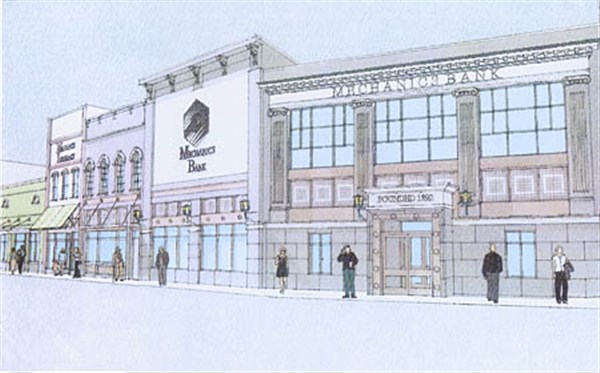 This drawing is a vision of what the bank buildings will look like. But, much of what is done will depend on what is found underneath the facades. 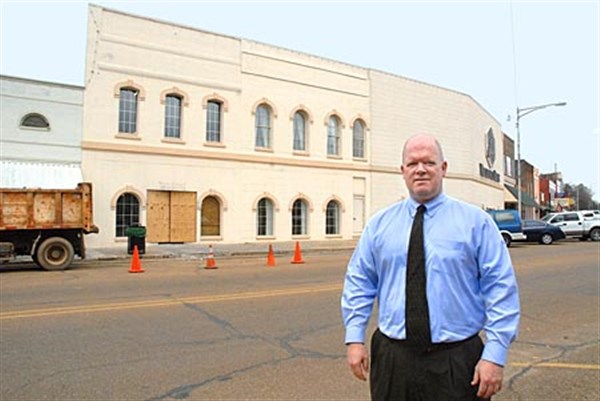 Mechanics Bank President Cam Tyler stands on Main Street in front of the bank. Work is already underway for a major renovation. – Photo by Jack Gurner


WATER VALLEY – Big changes are coming to the Mechanics Bank’s Main Street facilities that will include a new facade and lobby and additional workspace for employees.
But, nothing about the bank’s hometown personal service will change, according to Cam Tyler, President/CEO. “I think it is going to make us better at customer service and be a place that people like coming to more.”
Tyler said that the bank’s board and board president Bill Larson believe that Mechanics Bank is one of Water Valley’s keystones. “They want to be a part of the movement to improve Main Street,” he said.
The lobby is going to get a total rework, Tyler continued. “It’s going to be opened up a lot more. The ceiling is going up all the way up without the drop ceiling. And, we’re going to add an entryway with windows that let more light into the lobby.”
The renovations are expected to take at least a year. Hill’s Construction is first going to do the work that doesn’t interfere with the bank’s everyday business, Tyler said. He expects to then move banking operations into a building to the south while the lobby is being renovated. “I’d say we are five to six months before that has to happen.”
While there is a vision of what the buildings will look like, Tyler emphasized that much of what is done will depend on what is found underneath the facades. “They have got to see what the buildings are made of.”
He added that they wouldn’t be able to go back to the look of the original buildings because of what has been done to them over the years. But, they will be able to make the buildings look like distinctive, separate structures. “It will give the bank a little more personality than it has right now.”
At present, work is underway in the building that housed the community room.“ They have stripped that out from front to back. That’s so they can come in and shore up to make the upstairs usable. About six offices will be added in that building,” said Tyler.
Eventually, that storefront will become Mechanics Insurance. “Business is getting better so eventually we’re going to need a storefront rather than just an office in the bank. Right now we have one person working insurance, but ultimately that will be two or three.”
The community meeting room will move into the candle shop building (the old Kroger grocery store or “green” building, as it is sometimes called). The front two-thirds will be the community room with a kitchen area and restrooms.
“It gets used a lot,” Tyler said of the community room, an idea he credits to retired president Eddie Ray. “He’s really involved with Main Street and has wanted to do a lot of what we are going to do.”
The Tupelo-based firm, JBHM Architects, is handling the project and is coordinating with the Water Valley Main Street Association on the look of the bank’s new front. “We’re putting in new sidewalks and the architects are looking at the Main Street Association’s long-term plan for landscaping and bump-outs.”
There will also be new ATMs including a drive-through ATM in the back near where the drive-through is now. Additional changes in the back will include new entranceways and everything will be handicap accessible.
Tyler smiled broadly when he talked about the way the 55 people who work in the building feel about the project. “Even the employees are excited about the new look.”