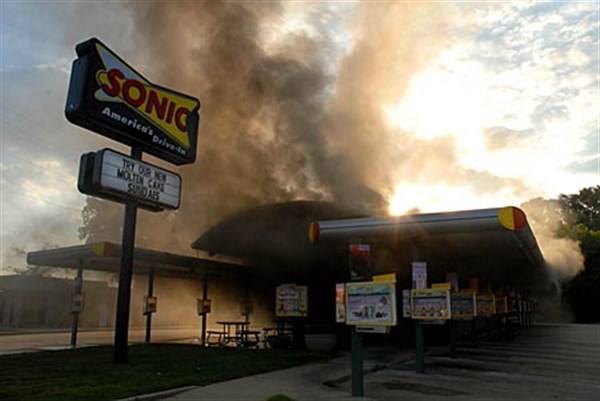 Sonic has been closed since last August when a fire gutted the building. – Photo by Jack Gurner


WATER VALLEY–The local Sonic is ramping back up the work force in preparation of a mid-March opening after a fire gutted the building last August.
“It has taken longer than we anticipated,” reported Frank Hernandez, supervisor for the Westerfield Franchise that operates five Sonics including Batesville, Sardis, Bruce and Saltillo.
Everything inside the building was gutted, including the floor.  The gutted building was only five years old after a major expansion for the franchise was completed in 2008.
“We didn’t save one spoon or any equipment from the building. Everything was either fire or smoke damaged,” Hernandez said.
“We have got a lot of new equipment, we are almost doubling all of our ice cream and slush stuff,” Hernandez added. The expanded capacity comes as Sonic will roll out a big slush promotion this summer.
“We will also have new menus, a new computer system, it will be new to us,” Hernandez said.
With the anticipated busy opening, as many as 50 people will be hired, including a new manager after Ron King retired after working as manager for the franchise for three decades.
Sonic has already had two rounds of applications and a third is planned to fill the positions. Hernandez said that an estimated 40 people will work in the restaurant long-term, including the part-time positions.