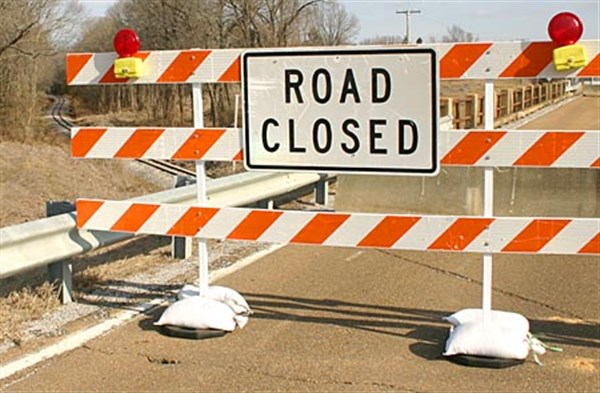 
OAKLAND – Repairs on a closed Hwy. 51 bridge could get underway as early as the end of this week after it was shut down almost six weeks ago. The bridge is located three miles south of the  Hwy. 32 and Hwy. 51 intersection, and spans the railroad. It was closed on Jan. 22, following a routine inspection by MDOT engineers.
A contractor has been selected and work will begin at the end of this week or the beginning of next week, Jason Scott, a public information officer with the MDOT, told the Herald Tuesday.
“The holdup has been because of the railroad company,” he said, referring to Grenada Railway, LLC. “Because the bridge is over a railroad track, MDOT has to have an agreement with the railroad on the work.”
The railroad company has approved and signed the contract and the highway commission scheduled the repairs at their last meeting, Scott added.    “The repairs should take no longer than about two weeks.
The matter surfaced in Monday’s supervisor meeting after county officials noted there seemed to be little activity on the bridge repair. Initially MDOT officials estimated the bridge would only be closed a week, but after six weeks District 5 Supervisor Frank “Bubba” Tillman said concern was growing.
Board President Tommy Vaughn acknowledged that county did not have involvement with the bridge repair on the state highway.
“But we get that question a lot,” Vaughn explained as he instructed  county economic development director Bob Tyler to find out about the repair timeline.
“We’ve got Lehman-Roberts over there, we have a trucking company (J.R. Dukes) right there that is going 30 miles out of the way each morning before they get started on the job, our workers at Windsor Foods are having to route out of the way to get to work,” Tillman explained. “Just give us some kind of idea of what is going on,” Tillman told Tyler.
Scott contacted the Herald Tuesday morning after Tyler told officials at MDOT in Jackson about the concern voiced in Monday’s meeting.
“This is good news that the bridge repair will get underway soon and move fast,” Tyler told the Herald.  “A number of Yalobusha citizens have been forced to travel long distances to reach their workplace.”