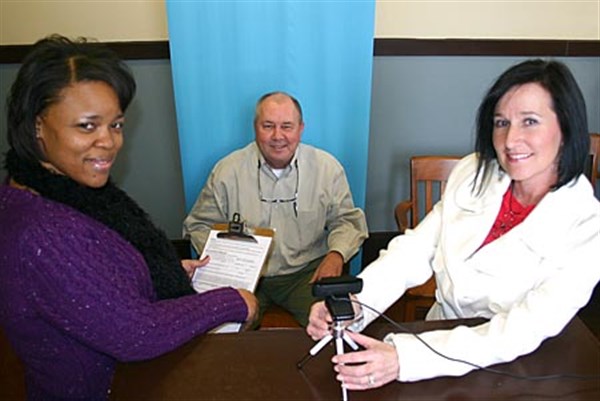 
WATER VALLEY– Voters who do not already have some form of photo ID can have a Mississippi Voter ID card  made in the Circuit Clerk’s offices in Coffeeville or Water Valley for free. That’s because starting with the June 3 party primaries in Mississippi, voters will be required to show some form of photo ID to vote.
Circuit Clerk Daryl Burney reported that the Secretary of State’s office has provided software and cameras to outfit circuit clerk offices across the state to provide the Mississippi Voter ID card to an estimated one percent of Mississippians who do not already have some type of photo ID.
Burney urged voters who do not already have a photo ID not to wait until the last minute to come to the circuit clerk’s office to obtain the state issued ID.
“It takes seven to 10 days to receive the ID in the mail,” Burney explained. Only the photo is taken at the local offices, which is then sent to the Secretary of State’s office for processing.
Burney also told the Herald an estimated one to two hundred people in the county actively vote and do not have a photo ID. He said seven IDs have already been issued in the county.
Burney also provided information from the Secretary of State’s office to inform voters on the change:
IDs accepted for voting include:
• A driver’s license
• A photo ID issued by a branch, department or entity of the State of Mississippi
• A U.S. passport
• A government employee ID card
• A firearm license
• A student photo ID issued by an accredited Mississippi university, college or community/junior college
• A United States military ID
• A tribal photo ID
• Any other photo ID issued by any branch, department, agency or entity of the United States government or any state government.
The ID can even be expired, if it is not more than 10 years old and contains the name and photograph of the voter. The law also provides exemptions from the photo ID requirement, specifically for  voters who vote an absentee ballot by mail, fax or email and  voters with religious objections to being photographed.
A voter that does not have a photo ID on election day will be asked to vote by affidavit ballot at the polling place. The voter will then have five business days to show an acceptable form of photo ID, or apply for a state ID.

How does a voter get a Mississippi Voter Identification Card?
A voter must bring any ONE of the following to the Circuit Clerk’s office:
• Any expired but valid photo identity document having the voter’s name and photograph issued by the U.S. Government or any U.S. state
• A birth certificate
• A Social Security Card
• A Medicare Card
• A Medicaid Card
• A Mississippi Voter Registration Card
• A utility bill, bank statement, paycheck or government check, if it has been issued during the preceding six months and contains the voter’s name and current address

History of Voter ID
Mississippi’s Voter ID law was enacted after 62 percent of the state’s voters favored the constitutional amendment during an election in 2011. Legislators put the mandate into law in 2012, but the measure did not get federal approval required by the U.S. Justice Department– a pre-clearance requirement as part of the Voting Rights Act.
Mississippi’s voter ID proposals were still being reviewed by the Justice Department last summer when the Supreme Court ruled that federal approval was not needed to alter election laws, striking down part of the Voting Rights Act.
For more information about the photo ID requirement, contact the Secretary of State’s Voter ID Hotline at 1-855-868-3745.