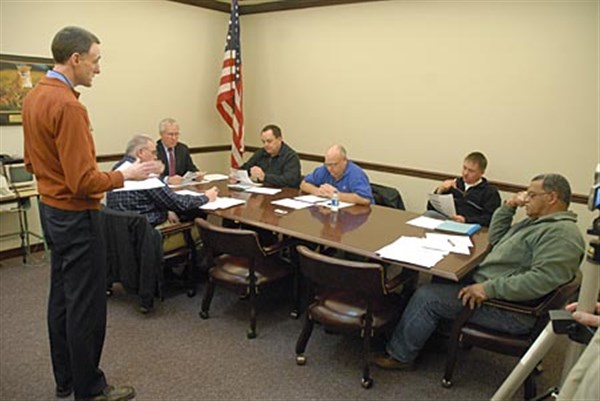 
WATER VALLEY – A kindergarten student from outside the district will be allowed to begin school at Davidson Elementary School next fall after being released by the school board in Calhoun County.
During the first of the month meeting Monday night, School Board President Lamar Burgess questioned if the agenda item should be discussed in executive session.
“Unless you have a problem with it, we need to leave it within regular session,” answered Superin-tendent Kim Chrestman, who explained that the unidentified child’s mother has worked in Water Valley for several years and wants to start the youngster here.
“They have petitioned  the Calhoun County board to release that student and they have agreed to do so,” Chrestman continued.
Burgess noted that, “the dollars will follow the child,” a reference to the amount of state education funds allotted per student that will be lost by the school in Calhoun County and given to the Water Valley School District.
Trustee Pierce Epes asked if the district had a policy on accepting students since there is a policy of not releasing students from the WVSD.
“No.” said Chrestman. “That’s up to the school board.
The superintendent said that he talked with the mother and explained that the child would have to be released by Calhoun County. “We don’t release,” he emphasized, referring to the long-standing board policy of not allowing students to leave the district for any reason. “As far as I know we will accept her, but that will have to come from the board.”
Trustee Casey Washing-ton made a motion to accept the child followed by a second from Trustee Bryan Gilley. All five members voted to accept the kindergarten student.
Among other actions at the March 3 regular monthly meeting, trustees:
• Heard an explanation by Dr. Glenn Kitchens of testing and test scores.
• Approved a field trip request to the Memphis Zoo.
• Made changes in the school calendar to show Feb. 14, April 21 and May 27 as makeup days.
• Approved a contract with Communicare to provide counseling services for students at DES and WVHS.
• Heard the superintendent’s report from Chrestman who announced that both the WVHS and the DES cafeterias under Food Service Administrator Mike Robertson received “A” ratings from the Mississippi Health Department during their recent inspection.
The complete report is included with this story on the Herald’s website: www.yalnews.com.