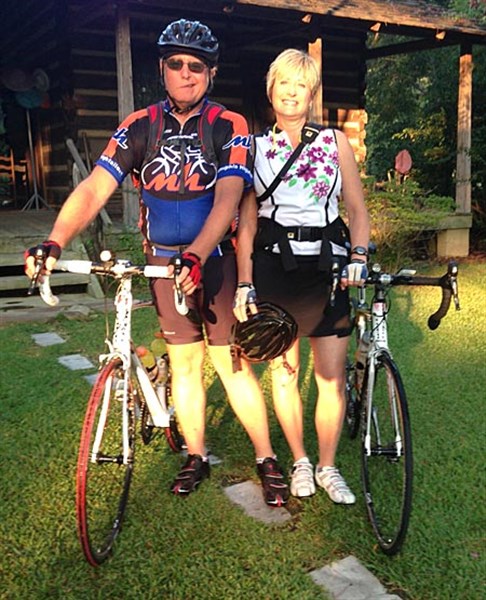 Dr. Ken Byrd and his wife, Dr. Kathy Byrd, have a new outlook on life after he recovered from the plane crash. Although he had to retire from his medical practice because of issues from the brain injury, he is able to walk, drive, sail his sailboat and ride his bicycle. – Photo Provided 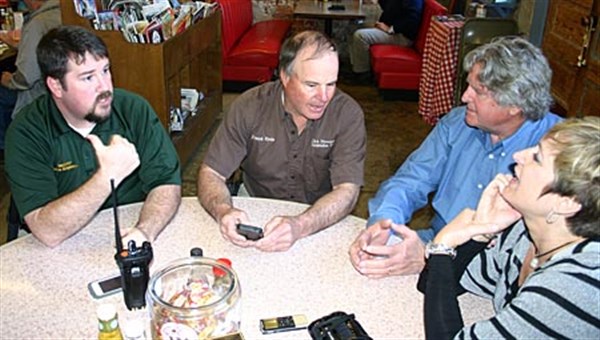 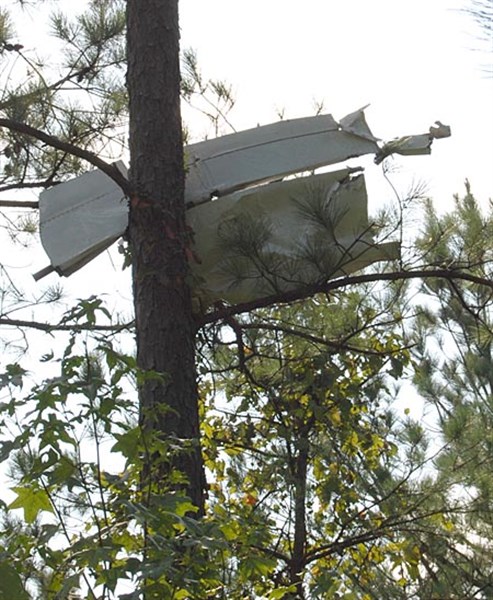 It was wreckage perched high in a pine tree that was first visible to Garrett Pollan, who volunteered to take to the air the morning after the crash and help search for Dr. Ken Byrd. Working from the air, he was able to guide the ground crew to the plane. The Byrd family has maintained contact with Pollan, who lives in Grenada. 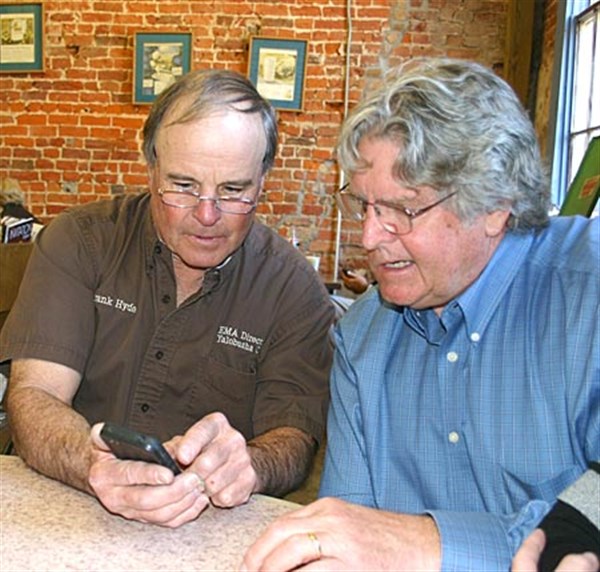 
WATER VALLEY – Many times emergency responders spring into action without the slightest idea who may be in danger. This story is a tribute to all the responders in the county–fire, police, deputies, fire fighters and first responders. It doesn’t matter if they were involved in this particular rescue, they have been involved in countless life-saving operations.
The story starts on a stormy night on Labor Day weekend in 2012. Dr. Ken Byrd was flying home in his Cessna 210 airplane returning to Memphis from a weekend visit from North Carolina. He steered his plane farther south than originally intended, diverting from his original flight path to dodge a strong thunderstorm.
Flight Aware mistakenly showed he finally landed at the Water Valley airport. That report was based on his last radio contact  with the FAA.
Meanwhile back at home  in Germantown his wife, Dr. Kathy Byrd, had monitored the storm and Flight Aware and went to bed when his landing was reported in Water Valley.
Ken had logged more than 5,000 hours flying time and she had grown accustomed to flight plan changes.
But as the hours clicked by during the night, she became worried as she knew he would usually take off as soon as the weather permitted and come home, even if it was in the early morning hours.
By the next morning she looked up the number to the Water Valley airport and made contact with airport manager, Michael Scoggins, who reported there was no plane at the airport.
It wasn’t long before Kathy was connected to Sheriff Lance Humphreys and learned a search had been underway for much of the night after multiple 911 callers reported a plane flying at treetop level in western Yalobusha County, possibly in distress.
Although at that time there was no report of a crash, law enforcement officers and volunteers had searched during the night based on the eyewitness reports.
The search resumed at dawn with the help of a plane from the Grenada airport.

Wife Stands Strong
It was only a matter of minutes after the search plane got into the vicinity before reporting wreckage  in a heavily wooded area near Tillatoba. The plane had been down almost 11 hours and there was little optimism initially.
“I got the phone call you always dread as a wife. I thought there is no way,” Kathy recalls as she feared the worst.
She learned Ken’s downed plane was located and he was clinging to life. She was waiting at The Regional Medical Center in Memphis when the AirEvac chopper landed and could not help but wonder  what was ahead if he survived.
“Here is this active guy, going going, doing doing. How would he do as an airplane survivor?” she recalled.
It would take months before that question was answered, and it was his strong will and her dedication that brought them through the ordeal.
Their story was shared last Friday during a trip to Water Valley to express thanks to the first responders and for the prayers lifted up for Ken. They also shared their new outlook on life.

Sketchy Memory, Slow Recovery
Ken doesn’t remember the last few hours of his flight. He doesn’t remember clinging to life during the 12-hour lapse between the crash and rescue. He doesn’t remember the flight in the helicopter to the Memphis hospital.  He doesn’t remember  the 25 days he spent in the MED undergoing surgeries for serious injuries to his brain, back, wrist and knee.
Both Hyde and Humphreys were able to fill in some gaps about the rescue mission  during last Friday’s visit.
Hyde recalled the two paramedics on board the AirEvac helicopter working furiously to stabilize Ken as soon as they got to him.
It took almost three weeks and five surgeries before he was released from the Intensive Care Unit at the MED. He was able to sit up soon afterwards and eat his first solid food 24 days after the crash. By the end of that fateful month, Ken started physical therapy and slowly regained his strength.
After several weeks Kathy had to return to her clinic and juggled her work load with caring for Ken–a schedule that lasted for months.
“She got strength from somewhere,” he added.
His recovery included a total of seven surgeries. He received a titanium plate on the right side of his skull, a gram of gold in his eyelid to close it because of the brain injury. The gold helps his eyelid shut when he relaxes it. He has a plate in his wrist and screws in his knee. He also has a metal rod in his back that also has horizontal metal supports he affectionally calls a centipede because of how it looks on an x-ray.
“There was a time there they didn’t think I could walk,” Ken recalls.
With the knee damage, Ken discovered that bicycling was one activity his knee could handle and by last fall the couple logged two 65-mile rides on their bikes–a remarkable recovery.
His injuries forced him to retire as an OBGYN physician. Kathy, an ophthalmologist, continues to work four days a week at her clinic in Memphis.

What Went Wrong
With no memory of the final hours of his last flight behind the controls of a plane, Ken can only speculate about that night.
But the National Transportation Safety Board (NTSB) determined the plane ran out of fuel. According to the report, the airplane had flown five hours, 28 minutes without refueling.  The plane was rated for five hours, 10 minutes at 70 percent power, not accounting for the fuel used during engine start, taxi, take-off and climbing.
According to the same NTSB report, Ken notified an air  traffic controller about five hours into the flight that he was going to deviate to a nearby alternate airport, which was in clear weather conditions. As a result, flight-following services were terminated when Byrd was about 10 miles from the Water Valley airport where he was expected to land.
Byrd could only speculate that he may have changed his mind about landing in Water Valley because of the difficulty of landing with a cross wind on a short runway.
The NTSB report stated that according to global positioning system (GPS) data and a witness on the ground, the airplane flew safely over the Water Valley airport and circled; however, rather than land, the airplane continued to fly north.
The report added that the GPS data revealed he flew north to Batesville,  before heading south again.
When the plane went down, it was just a quarter-mile from I-55 near Tillatoba and Ken speculated he may have been trying to reach the highway to set his plane down.
“Most people who land on interstates survive,” he explained.

Positive Outlook
During the visit last Friday, Ken expressed gratitude for all of the first responders who searched through the night.
He explained that the professionalism from the first responders–both during his extraction from the crumpled cockpit and the transport out of the woods to the waiting helicopter–made it possible for him to walk again. He had fractures on two of his lumbar vertebrae, rendering his spine very unstable.  One wrong move and he could have been easily paralyzed.
“Thank you, thank you,” Ken said more than once.
During the two-hour lunch meeting, it was readily apparent that the couple’s strong medical background had been a big asset during the recovery. But it was their sense of humor that truly told the story.
Hyde recalled the frantic work by paramedics when they got to him.
“They were busy, they handed me the scissors and told me to cut his pants,” Hyde recalled.
“And those were my favorite pants,” Ken quickly quipped. “I wondered what happened to them.”
“He lost 40 pounds in the hospital,” Kathy added. “We call it the crash diet,” she joked.
“So I didn’t hit anybody’s house, just a bunch of trees,” Ken said, noting one positive from the crash after seeing the exact location on a map.
He also describes a visit with his neurosurgeon a year after the crash.
“He said, ‘How you doing doc?’”
Ken answered, telling him he was doing fine. “But it sure hurts when I play golf,” Ken added.