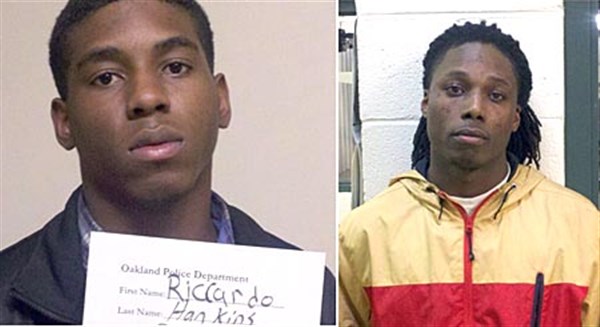 
OAKLAND– Two Panola County men were arrested Thursday in connection with a pair of armed robberies at two Oakland convenience stores.
Oakland Police Chief Russ Smith reported Joshua Hines, 20, and Riccardo Javier Hankins, 18, both of Courtland, were taken into custody following an intense investigation with help from the Panola County Sheriff’s Depart-ment, the Yalobusha County Sheriff’s Department and the Mississippi Highway Patrol’s Crime Scene Unit.
The first robbery occurred in January, when two armed men entered the Shell Oakland Express brandishing pistols and demanding money. The men took their time as they looted the business, leaving with money and other items. Two customers entered the business during the holdup and were also robbed. Although the store had extensive surveillance video, both men had their faces covered during the frigid night and authorities were unable to get any solid leads.
The break in their case came early Monday morning, after the Exxon Gas Mart was robbed at gunpoint just after 3 a.m. Although the lone gunman was covered, Smith said the surveillance video captured a clear image of a man eight minutes before the robbery who appeared to be casing the business. Smith told the Herald he believed the image of the man appeared to match the description of one of the suspects in the January holdup. Smith also said the cameras captured an identical car in both robberies, making a strong case that the robberies were related.
Using their best lead from both cases, the Oakland Police Department circulated the picture from Monday’s armed robbery, sending the image to Tupelo and Memphis television stations and the newspapers in Charleston, Water Valley and Batesville.
“We felt like someone would recognize him,” Smith told the Herald.
Both readers from the Panolian newspaper in Batesville and viewers from the news stations called the police department reporting that the picture looked like Hankins. Smith said family members of Hankins also reported a possible match.
Hankins turned himself in to authorities this morning at 11 a.m. with his attorney, Stan Little of Desoto County, at his side. He has been charged with two counts of conspiracy and two counts of armed robbery. His bond has been set at $50,000. Hines was apprehended at his residence located on Ruby Road in Courtland Thursday afternoon.
“We went to Hines’ employer in Batesville Thursday afternoon and he had clocked out and left four minutes before we arrived,” Smith said. However a Panola County investigator was able to take him into custody shortly after he arrived at the residence on Ruby Road when he returned home.
Hines was charged with four counts of aggravated assault and four counts of armed robbery and two counts of conspiracy. His bond has been set at a half a million dollars.
Smith said evidence  recovered at Hines’ residence also will be used to link the men to the crime.
Smith said that Hankins was the alleged driver in the robberies, while Hines was the alleged gunman, which accounted for the additional charges. The four counts against Hines stem from the clerk and two customers robbed in January and the clerk robbed on Monday.
Smith also said a third man wanted in connection with the January robbery is still at large.
“I want to thank the Panola County sheriff’s department for the help in this investigation,” Smith told the Herald. Smith also expressed gratitude for help from the Yalobusha Sheriff’s Department and the Mississippi Highway Patrol’s crime scene unit.
“We put a lot of hours in this case. We needed to get these guys behind bars.”