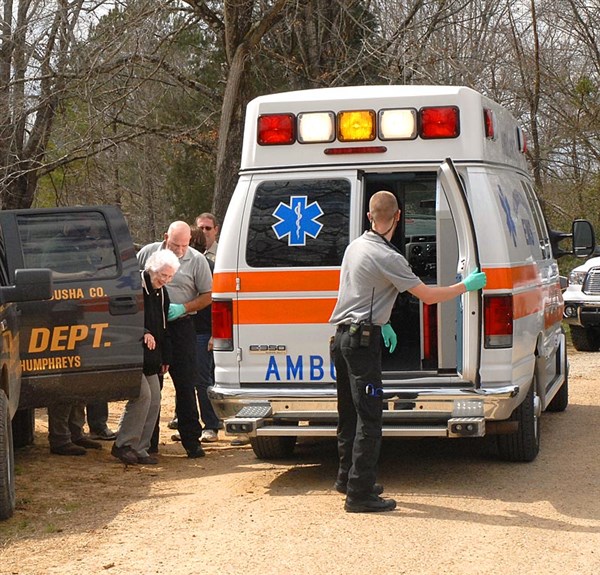 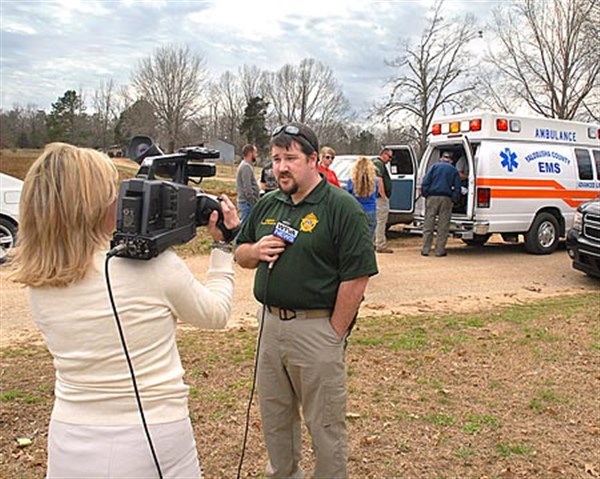 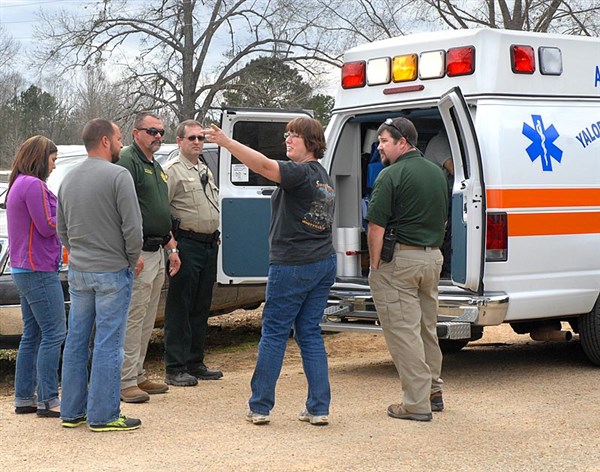 As family members waited at the scene for Mrs. Dorris to be checked by medics, her daughter, Sandy Hils (center) said that it had been a long, drawn out ordeal. 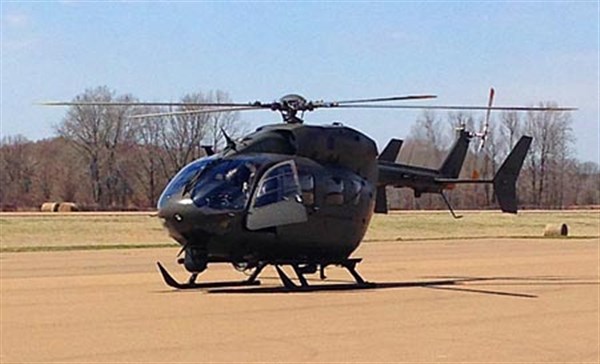 
WATER VALLEY – After an exhaustive search, authorities located a Yalobusha County woman last Friday who had been missing since around noon the previous day.
Betty Ruth Dorris was discovered around 1:30 p.m sitting in her vehicle in a wooded area off County Road 557 near Ford’s Well Horse Trail. Sheriff Lance Humphreys reported Dorris, who suffers from Alzheimer’s, was in good condition when rescuers got to her car.
A Mississippi National Guard helicopter had joined the search and in less than 10 minutes spotted Mrs. Dorris’ vehicle, a white 2004 Lincoln Town Car.
“When I walked up to the car, it looked like she was sleeping. When I knocked on the window I asked her if she was OK, she said she was fine and asked me how I was,” Humphreys told the Herald. “We put her in one of our patrol trucks and brought her to the ambulance.”
Governor Phil Bryant authorized the helicopter after Yalobusha Emergency Management Director Frank Hyde called MEMA (Mississippi Emergency Management Agency) and MEMA got in touch with the governor’s office, Humphreys explained.
Hyde said that he had gone through Civil Air Patrol, but they had to have a mission. “They want a specific area to search.”
Thursday evening and into Friday morning Sheriff’s deputies had methodically checked all of the county roads from the Tallahatchie County line on both sides of Hwy. 32 all the way to Hwy. 7 searching for Dorris.
While searchers were working in Yalobusha County, Humphreys said all of the neighboring counties were also involved in the search. The statewide Silver Alert issued Thursday also kept authorities busy after several false sightings of her vehicle were reported.
“The Silver Alert really worked. We had people all the way from south of Jackson to Memphis calling in reports of possible sightings,” Humphreys said. “When people across the state hear the alert, they want to help, they were looking for her car.”
As family members waited at the scene for Mrs. Dorris to be checked by medics, her husband, Jim, thanked emergency responders and volunteer searchers.
Her daughter, Sandy Hils said that it had been a long, drawn out ordeal.  As Mrs. Dorris was taken to the ambulance, she asked why Hils was crying. “I’m fine, momma. I’m fine now,” Hils responded.
After being checked, Mrs. Dorris climbed down from the back of the ambulance and went home with her family.
Hyde, who was visibly exhausted from the search, said that rescuers had been in the area, but would not have checked what was little more than a four-wheeler path.
“Looking for a lady in a Crown Vic, you wouldn’t have looked down that trail,” he said.