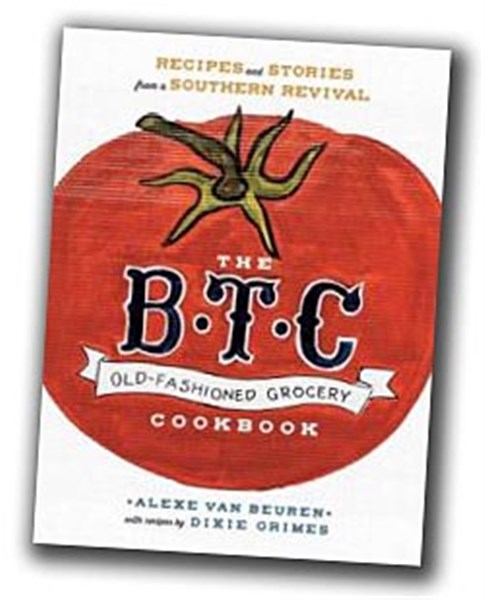 
WATER VALLEY – “The B.T.C. Old-Fashioned Grocery Cookbook” went into national release Tuesday bringing additional publicity to the town from media outlets nationwide.
“Be the Change” is the store’s slogan and it certainly has been in the center of the revival that has seen more businesses open in the past five years than in the previous couple of decades. And, while there are a number of factors that have contributed to the new growth, the B.T.C. is certainly one of the contributors.
The cookbook, published by Clarkson Potter of the Crown Publishing Group, a part of Random House, is 240 pages of good food, good friends and inspiration. Authors Alexe van Beuren and Dixie Grimes have put together what is being described as recipes and stories from a southern revival.
The story – only slightly embellished by the publicity department at Random House – tells how there’s been a revival of food and community here. According to the news release, bucolic small-town Water Valley wasn’t the most logical place to start a grocery and cafe, but that’s just what Alexe van Beuren did, in a historic building that her husband had saved from demolition. The B.T.C. Old-Fashioned Grocery opened in 2010 amidst a cloud of hope and dreams, full of glass-bottled milk, local produce, and Cora’s fried pies.
Trouble loomed when hope and dreams proved insufficient for the daily realities of running a small business when lo and behold, Dixie Grimes, a five-star chef, walked through the door in need of a job. Within a few months, Dixie’s food had folks lining up at the window, and the two women discovered that after all, this small town in rural Mississippi was exactly where they needed to be.
The B.T.C. quickly cemented its place as the center of town life, serving hearty breakfasts and comforting lunchtime meals, as well as selling prepared foods like casseroles, salads, and spreads to take home. With vibrant storytelling, 120 recipes, and 60 evocative full-color photographs, The B.T.C. Old-Fashioned Grocery Cookbook ($29.99; Hardcover) shares the inspiring story of how dreams can pay off in a small-town tale of food, friendship, and tradition.

Comments
While the public relations folks are working to get the word out, other folks who don’t have a dog in the hunt are saying really nice things about the book.
Virginia Willis, author of “Bon Appetit, Y’all” and “Basic to Brilliant, Y’all” had this to say: “‘Be the Change,’ indeed! This inspirational story makes me proud of the new South. The B.T.C. Old-Fashioned Grocery Cook-book is packed with down-home comfort recipes, as well as modern takes on traditional Southern ingredients. Magnificent color photos, detailed, helpful tips, and cheerful stories make this a welcome newcomer to the cookbook library.
Martha Hall Foose, author of “Screen Doors and Sweet Tea” and “A Southerly Course” added her two cents: “The B.T.C. Old-Fashioned Grocery Cook-book is charming. Alexe and Dixie share, so openheartedly, the story of one little market, and by doing so give readers a chance to revel in a rural small-town revival. Hoop and Havarti Macaroni, Sweet Potato and Green Chile Casserole, Peach Ice-box Pies—the recipes inspire home cooks to remember the classics they cherish and draw their loved ones around the table for good, old-fashioned conversation.”
These nice words came from Jessica’s Biscuit/ecookbooks.com, for 34 years, America’s cookbook store: In 120 recipes and 60 beautiful full-color photographs, The B.T.C. Old-Fashioned Grocery Cookbook shares the inspiring story of how small town America was revived by a few caring folks who gathered around tables for excellent Southern fare, and found friendship and tradition.
Jesse Yancy of Oxford’s The Local Voice newspaper said: The B.T.C. Old-Fashioned Grocery Cook-book spotlights the small town Main Street South and focuses on good, real people creating real good food and helping to make the world a better place.
Sharon Thompson of the Lexington (Kentucky) Herald-Leader noted that she gets a lot of cookbooks across the food desk, but “there’s one in the stack that speaks volumes about community, and a little about recipes. And, every recipe has a story. This one goes with breakfast grits: ‘Between 8 a.m. and 10:30 a.m. Monday through Saturday, the odds are good someone will be sitting in a back booth eating grits. People love our grits so much we put a bowl of ’em on the menu, and it comes with a side of sausage or bacon for $3.99.’”
In Alexe’s old stompin’ grounds, radio station Fox 106.9 in Hampton, Virginia is running a contest to give away a copy of the book to a lucky randomly-chosen listener. And, KRNB 105.7, smooth rhythm and blues station in Grand Prairie, Texas is also giving away a copy.
KFMB 760 radio in San Diego, Calif., offers the cookbook as a prize along with tickets to NASCAR or a Backstreet Boys concert.
The national release of the cookbook Tuesday evening coincided with a book signing at Off Square Books in Oxford. Additional signings with the authors are scheduled for March 24 at Lagniappe Gifts in Greenville, April 5 at Lorelei Book in Vicksburg and April 26 at the Benjamin L. Hooks Central Library in Memphis.
The book is available at the B.T.C. Old-Fashioned Grocery and from several online sources including Amazon.com in hardcopy or for the Kindle. It’s also on iTunes for the iPhone, iPad, iPod touch and Mac.

About The Authors
ALEXE VAN BEUREN is the owner of the B.T.C. Old-Fashioned Grocery. Raised in the Blue Ridge Mountains of Virginia, she now lives with her husband and their two children in Water Valley.
DIXIE GRIMES is an Oxford native who has cooked for more than two decades in many fine restaurants. She has helmed the kitchen of the B.T.C. since 2011.