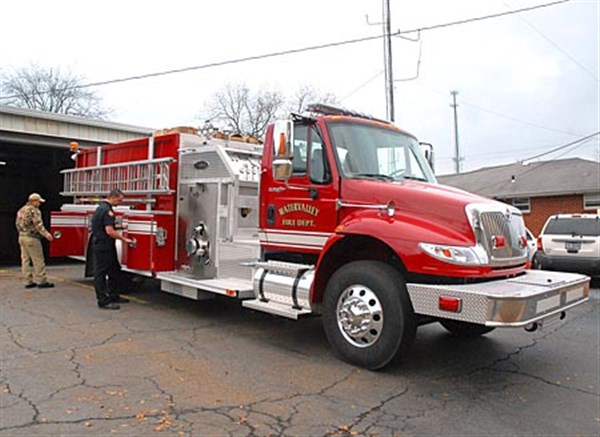 
WATER VALLEY – City officials have to return $70,000 to the municipal fire protection fund after state officials discovered the money was used to match a $70,000 grant from the Rural Fire Truck Acquisition Program to purchase a new fire truck for the city.
At a called meeting of the mayor and board of aldermen Monday afternoon, Mayor Larry Hart told aldermen he received a call the previous week from Larry Barr, State Fire Coordinator, stating that city funds should have been used to match the grant.
Money from the fire protection fund can’t be used as matching funds, according to guidelines in Bulletin 95-7 issued by the Mississippi Department of Insurance Fire Services Development Division.
Under provisions of the guidelines, grant applicants must pledge to pay an amount at least equal to the amount they are requesting. The pledged monies may be derived from ad valorem tax or from any other monies available to the county or municipality with the exception of monies from the Municipal Fire Protection Fund, the bulletin states.
Hart noted that the municipal fire protection fund is for buying fire trucks and firefighting equipment. “So, we thought we were alright there.”
“In order to keep everybody happy,” Hart continued, “I am suggesting to you that we take the money and make that swap from one account to the other.”
The city’s municipal fire protection fund is kept in an account here and comes from insurance rebate monies. “That muni fire fund is our money,” Hart emphasized. “It’s sitting up at the bank in an account and we can spend out of it and buy fire trucks or fire equipment, but we just can’t match this grant with it.”
The city’s new fire truck was purchased in 2012 for $228,200.
The only other action taken at the March 24 special meeting was to vote by aldermen to authorize the board attorneys, Crow Martin LLC, to correct some issues involving the title to the W. C. Gardiner Industrial Park.
“We own it. There is no chance of us losing it,” said the mayor, as he explained that the issues emerged during preparations for the deal with Tallahatchie Valley Electric Power Association to build a substation at the park.
“Nobody stands to lose any ground. It’s not in the record at the courthouse as such,” Hart added. “John (Crow) wants to correct that record to show that it is clear.”