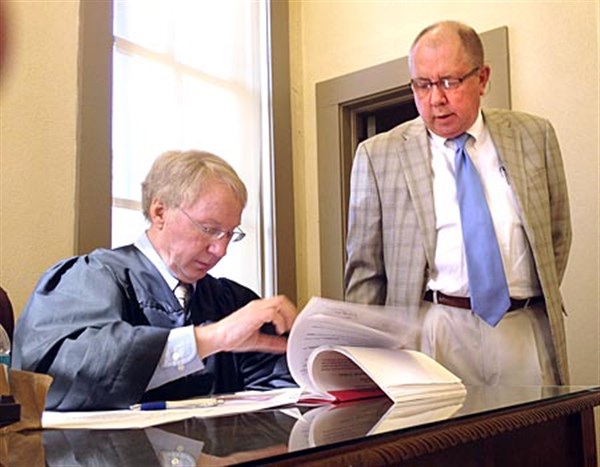 
COFFEEVILLE – Twenty-one convicted felons with unpaid fines received an ultimatum last Thursday– pay up or go to jail. That ultimatum came during the first  round of show cause hearings in the First Judicial District in Coffeeville for the felons who had not paid the fines assessed alongside incarceration or probation from their original sentence.
Each of the defendants appeared before Circuit Judge Jimmy McClure, who explained that paying the fines are part of their sentence, even after they are released from prison or  complete their probation. Most of the charges stemmed from drug arrests and some of the convictions dated back almost a decade.
Almost humorous, the excuses were wide-ranging as each of the 21 appeared before the judge to explain why they were delinquent. At least two of Judge McClure’s “customers” claimed the hearing had interfered with their first day on a new job. Another explained he had difficulty obtaining a job because of his past conviction.
“I even got turned down from McDonald’s,” he told the judge during court.
McClure first started holding the show cause hearings in the Second Judicial District in Water Valley almost two years ago. The hearings were effective and are now held across the 17th Court District that includes Panola, Yalobusha, Tallahatchie, Tate and Desoto counties.
“Nobody wants to go to jail and I like to remind them how crowded it is in the Yalobusha County jail,” McClure said. “The hearings are an opportunity to get them in and remind them. We set it up like a car note,” he explained after the hearings Thursday. “This is money owed the county. If the judge doesn’t collect, who is  going to do it?” McClure added.
For most of the defendants,  a second court date was scheduled in six months to check on the payments.
Circuit Clerk Daryl Burney reported the county received approximately $24,000 in fine money during the last fiscal year, almost four times more than budgeted. “We expect to double that this year,” Burney added.