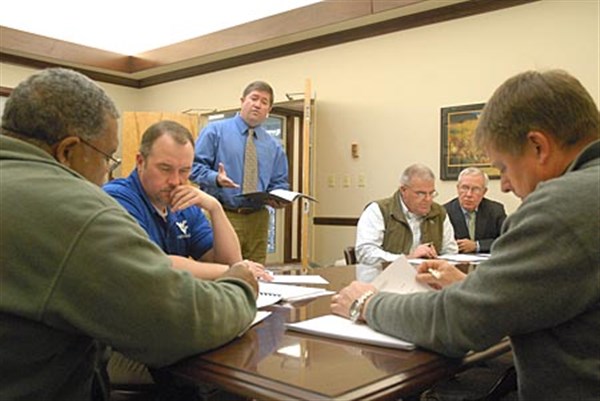 School officials received praise from Barry McKenzie (standing center) on their exemplary work during the previous year which led to a clean audit. – Photo by Jack Gurner


WATER VALLEY – It took less than five minutes Monday night for the school district’s audit firm representative to explain the annual financial report  because there was very little to explain.
For the first time in recent memory, there were “no material findings” in the audit for the school year ending June 30, 2013.
“It was a really good audit,” commented Barry McKenzie of the firm Watkins, Ward and Stafford, PLLC, certified public accountants of West Point, as he praised the school staff for their cooperation.
McKenzie pointed specifically to the school district’s general fund, which has gone up every year for the past four after having dropped to over $200,000 in the red. He explained that fund would currently be about $2.2 million minus $500,000 spent on a building project. “With the budget cuts you’ve been hit with, that’s good. It’s actually going up.”
The school district and District Business Manager Randy Goodwin have also received praise from State Auditor Stacey Pickering who said, “I would like to congratulate the Water Valley School District for their exemplary work over the previous year which led to this clean audit.”
The Mississippi Depart-ment of Education also acknowledged the audit results.
Among other actions at the April 7 school board meeting, trustees:
• Heard a state testing update from Davidson Elementary School Principal Dr. Glenn Kitchens and Assistant Principal and Testing Coordinator Grace Dickerson.
“Hopefully we have the right questions and the right answers for what you had asked for,” Dr. Kitchens said as he began his part of the 33 minute explanation of the very complicated subject.
He noted that the figures he was presenting were actual scores from practice tests given during the year and not predictions on how the students were doing.
During the presentation, Superintendent Kim Chrestman explained that the new accountability model that started in January has changed everything about the way students are assessed. “Some of it does not benefit us,” he added referring to the way that some of last year’s scores will apply to this year’s assessments.
Dr. Kitchens added, “This year’s teachers and students are being held accountable for our scores from a year ago.”
• Approved entering into contracts for the HVAC and window project at the high school.
• Accepted a $2,500 donation from Mid-South Rehab that will be used for additional technology.
• Approved a field trip request from the special education class at DES to visit the Childrens’ Museum in Memphis.
• Disposed of a long list of what Trustee Bryan Gilley referred to as “antique” assets.
• Heard the Super-intendent’s Report from Chrestman who congratulated the Water Valley High School FFA members for their success in Dairy Judging State Level Competition at MSU.  The junior high team placed second in state competition. Members are Trey Pipkin, Noah Harmon, Brennan Allen, Eric Williams and Ross Ingram.  The high school dairy team placed fourth in state level competition. Members are Harley Sharp, Savanna Welch and Kristie Nelson.
The full text of his report is available to Herald online subscribers at www. yalnews.com.
• The next regular meeting of the board is scheduled for April 21 beginning at 6:30 p.m. at the district office on Markette Street.


Davidson Elementary School students and staff are gearing up for the final few weeks of the 2013-2014 school year.  Many assessments are being administered and plans for activities and field experiences are being finalized.
Students thoroughly enjoyed the Body Walk that visited the campus.  Thanks to Ms. Andrea Clement for coordinating this event.  Nursing students from Northwest Mississippi Community College, WVHS Health Sciences Students and local economist Pam Redwine all played a role in the success of the event.  Thanks to all of them for this great learning opportunity.
Students from the Water Valley Headstart Center visited DES last week for transition tours.  The students really enjoyed their visit and we anxiously await having these students at DES for the coming school year.
Representatives from each homeroom at Davidson Elementary School participated in the March Character Breakfast.  Congratulations to each of the students who was selected as the Character representative for their homeroom for the month of March.  Thanks to Ms. Clement for coordinating this effort and to Pastor Randy Bain for being our speaker.
DES will have the annual Book Fair this week.  Students will have the opportunity to shop for books and book related items throughout the week.  Grandparents have also been invited to visit the Book Fair with their grandchildren.
Ms. Karon Stanford has scheduled a Job Fair called The Real World just before the Easter Holidays.  Students will visit 10 learning stations to explore careers and what they can expect in “The Real World” regarding day-to-day expenses such as insurance, deductions and car payments.
Ms. Stanford will also be holding early registration for the coming school year on April 15th and 16th for the convenience of parents in our community. Anyone who would like to get the yearly chore complete may visit the school and complete all required information on one of these two days.
Obviously, this is a very busy time for the kids of DES.  Thanks to everyone in our community who lends support to our school with all of our activities and events.
Congratulations to the Water Valley High School FFA members for their success in Dairy Judging State Level Competition at MSU, Friday May 4th.  Junior high dairy judging team placed second in state competition. Members are Trey Pipkin, Noah Harmon, Brennan Allen, Eric Williams and Ross Ingram.  High school dairy team placed 4th in state level competition. Members are Harley Sharp, Savanna Welch and Kristie Nelson. Both teams represented Water Valley very well.  Special thanks to Jill Sharp for chaperoning the girls during the overnight stay and during the contests.
Congratulations to the WVHS Softball and Baseball teams.  Both are only a win or two away from claiming the district championship. We anxiously await the state playoffs!!!
Next School Board meeting is set for April 21.