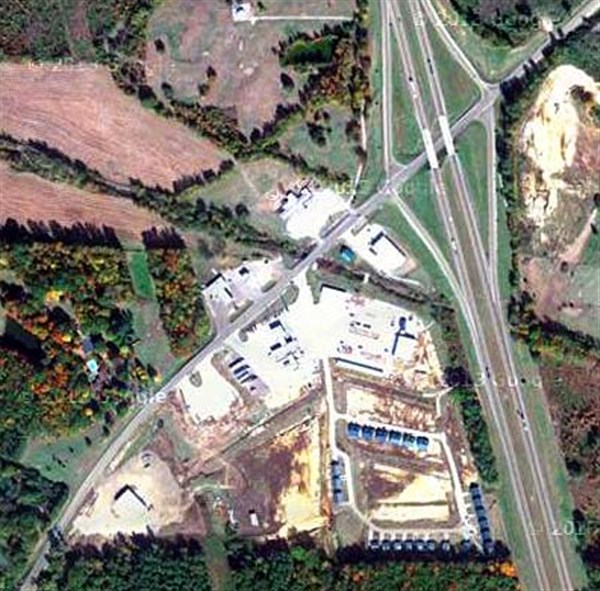 Cabins in Oakland are located at the bottom center right of this photo that shows the location between Hwy. 32 and I-55. – Photo courtesy Google Maps


OAKLAND – A lingering issue over water service in Oakland boiled over last Tuesday after a business owner asked town officials tough questions.
Michael Gray told Oakland aldermen that the town’s water department  was not treating him the same as another neighboring business owner, Larry Joe Lindley.
Gray told alderman that he purchased 23 rental cabins located along Interstate 55 from Lindley in March 2012. Later that year, he was forced to spend over $6,000 to upgrade a water line feeding the property after town officials threatened to shut off his water flow and install individual water meters at each cabin.
The meter work was necessary, Gray said. But he alleged that Oakland officials were aware that the pipe had to be replaced because it was too small, and only pushed the issue after he purchased the property  from Lindley.
“I paid the $6,000. But it was for something I was not responsible for. I bought the property like that. The city knew it was like that. When they saw a new player, they charged him,” Gray told aldermen  about the expense.
Gray’s claims were later refuted by Mayor Riley Swearengen, who said the town had requested Lindley to fix the pipe before Gray purchased the property.
“We didn’t wait until you bought it. This was something that was in the works when you bought the property. The state was on us,” Swearengen said about the problem.
Gray also said the town required him to install individual meters at each cabin, but had not required Lindley to do the same at each building he currently operates on adjacent acreage.
As evidence, Gray presented a photo of the single meter that he said served Lindley’s property.
“How many cabins does he have down there?” Gray asked. “Does anybody know?” Gray asked again.
“Sixteen,” Gray said, answering his own question. That is in addition to three more businesses owned by Lindley on the same property all served by the same meter, Gray told aldermen.
“When I moved into this town y’all had a problem with all this running off one meter,” Gray said about his cabins. “But then the city allowed it again,” he told aldermen about Lindley’s latest cabins.
Gray then presented a copy of the town’s rules regarding the municipal water association.
“Here is the short of it, there is not an easement (from the town) on my property. Those water lines are mine. I bought them. I paid for them twice,” Gray said, referring to the actual purchase price of the property and accompanying infrastructure from Lindley and the $6,252 check he paid to the town to upgrade the line.
Gray later acknowledged that the check also covered the $20 meter hookup fee for each of his 23 cabins, or $460, plus a $100 deposit, money that he said was correctly assessed to him.
His reference to the lack of an easement by the town came to light next after Gray alleged that Lindley’s meter was actually located on his property, still connected to the same pipe Gray had paid to fix.
“The meter is on my property. Y’all put it there. By y’all, I mean  under your direction, the water contractor. Then you put in a meter. Then you let him do what he wants to with the water,” Gray said about the single meter serving the adjacent buildings owned by Lindley.
“Is that right? Is that how we operate in this town. I am the highest paying business here. I keep loyal people. I pay good salaries. I am not a minimum-wage, bull-crap company. I expect more,” Gray said about his company, Gray’s Power Supply, which is also located in Oakland.
Gray then read portions of the town’s water department guidelines, outlining the town’s policy.
“Did y’all know that you were hooking up a water line that is illegal under your rules?” Gray asked, individually asking each alderman.
“No knowledge of it,” Swearengen answered.
“Did y’all accept a payment from Larry Joe knowing his water meter was illegal?” Gray asked, referring to a deposit for Lindley’s new  water meter after his property was separated from the single meter  that was serving Lindley, Gray’s cabins and the convenience store that was also purchased.
“Didn’t know it was illegal,” Swearengen said.
“How could you not, you fined me for it?” Gray asked about one water meter serving multiple buildings owned by Lindley.
“Still don’t know it was illegal,” Swearengen added.
“How do you not know what is going on in your own town?” Gray asked.
“You seen the cabins being built,” Gray said about property improvement made by his neighbor that he claimed is served by a single meter.
“Steve Smith, your contractor – under y’alls guidelines – knows better. He know the state rules. What’s the state rules? One unit, one meter,” Gray added.

Gray’s Demands
The meeting then shifted to a couple of demands from Gray wanting to resolve the issue.
“My deal is pretty much over with. I paid the city to fix the  problem,” Gray told aldermen after they asked what he wanted.
“One, I want y’all to go back and charge him what y’all charged me for it,” Gray said.
“That’s only fair,” alderwoman Marzet Bland agreed,”
“And I want that meter taken off my property and I want that water capped off immediately. If you can’t do that. If you can’t get Steve (Smith) to do this tomorrow, I will have my guys out there and I will take it up myself. Because it is my land. My water,” Gray said.
“Do what you got to do,” Swearengen said.
“See, that’s what I figured you would say,” Gray said.
“I mean, you said that,” Swearengen explained, adding that he could not stop Gray if the meter is on his property.
“I would ask you to give him (Lindley) the opportunity to bring it another way,” Swearengen added.
“Y’all accepted the payment from him, knowing his water system was  wrong,” Gray continued. “Your contractor is supposed to answer to you,” referring to Smith, the water operator. “Your clerk is supposed to answer to you. Clearly they did not do that. And if they did do that, then you violated your own contract by overlooking it. Am I right or wrong here?” Gray asked town officials.
“If we did do that, I didn’t know it,” Swearengen answered.
“How could you not know your own rules?” Gray asked.
“I don’t know anything about your property, where the meter is,” the mayor explained.
“Let’s say the meter is on his property. He still has multiple units. The thing that you asked me to fix and I fixed, you allowed him to do,” Gray reiterated.
“On his property, we didn’t have single units, it was one,” Swearengen said about Lindley’s single meter.
Gray then showed pictures of separate buildings on Lindley’s property. Police Chief Russ Smith also explained that Lindley was in the process of converting mini storages into rental cabins.

Background From The Mayor
Swearengen countered Gray’s claims, explaining that the town had been aware of the problem with the water line.
“We didn’t wait until you bought it. This was something that was in the works when you bought the property. The state was on us. I am  aware of the letter from the state. We all were aware of that. You came in and bought it. We didn’t know who was buying it. We were on Larry Joe about the same thing. He jumped up and got an engineer and said he was going to fix it,” Swearengen said.
Gray countered, saying that the town’s water contractor should have reported that the work was never completed by Lindley to correct the problem.
“The city contractor follows up with y’all. Either he didn’t do his  job right or y’all didn’t do your job right,” Gray continued.
Next addressed was the legal work on the closing of the real estate transaction between Gray and Lindley.
“You should have got a clearance from him, whether it said public water, public sewage system or a private system,” Alderman George Booker Jr. told Gray.
Gray responded that his attorney had contacted city hall about the property, but added that he would have to dig deeper into the work performed by his attorney.
“But in 2011, you knew about the problem. It was not enforced until I bought the property. And the way it was enforced, you said you are going to cut off the customers until you pay this,” Gray explained.
Gray also said it took the town six months to fix the line after he paid the $6,000 in October, 2012.
“You are elected for a reason. It is not a popularity vote. If you allow things like this to happen, the city does not grow. We should be the biggest town in Yalobusha County. We have Interstate 55 right  there,” Gray told the board.

Roundhouse Discussion
After Gray’s formal presentation, both Gray, town officials and others attending the meeting had a frank discussion about the overall water issue.
First Swearengen set the record straight about allegations of impropriety in the town.
“Mr. Gray we are going to work on your situation,” Swearengen said.
Then Booker agreed that problems existed with the town’s water operator.
Booker also explained that the town’s water operator had indicated to aldermen that Lindley’s water line would have to routed from a different place after the three properties (Gray’s cabins, the convenience store and Lindley’s property) were separated from the  single meter when Gray paid the $6,000 in 2012.
“What we are all saying is that our contractor that works for our city is not doing his job,” Gray said, next asking why they do not find a different person for the position.
“We’ve been through that,” Booker explained. He added that a water contractor is not hard to find, but the challenge is finding a water operator that is certified in water and wastewater, a requirement for the job, Booker explained.
Alderman Joe Jenkins then said they needed to have their town’s water operator attend the next board meeting.
As the meeting came to a close, Gray agreed to allow the town a month to answer his allegations.