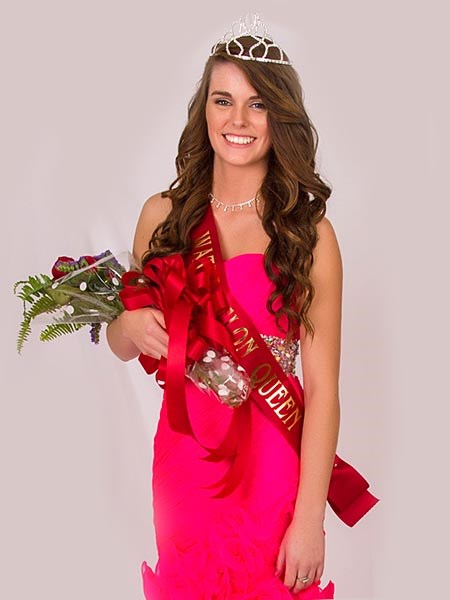 
Water Valley High School senior Peyton Hill was crowned Watermelon Queen during the annual Junior Auxiliary Watermelon Pageant last month. She is the daughter of Ricky and Bonnie Hill and a high school cheerleader.
As queen, Hill is requested to perform at least eight hours of community service during the next year. She expects to do much more, though, as President of the Crown Club at the high school. The Crown Club is basically a little sister to Junior Auxiliary and members learn leadership skills, develop lasting friendships, and learn the value of volunteering. The Crown club is composed of 10th, 11th and 12 grade girls.
Junior Auxiliary member Becky Tatum believes Hill is an ideal candidate to serve as Watermelon Queen.
“She sets a good example for the younger kids,” Tatum explained. “In the past couple of years she has been through so much,” she added, citing an automobile accident in 2012 that almost took Hill’s mobility.
Hill was in a wheel chair for almost 10 weeks after the wreck and she said it changed her perspective on life.
“It made me look at life different, that’s for sure,” she told the Herald.
Hill first competed in the Watermelon Pageant when she was six.
“I won that one,” she recalls. She tried again when she was 13 and was selected first alternate.
“I like being on the stage, doing my own thing,” she explains.
Hill plans to attend Delta State University in Cleveland. As queen, she will receive a $500 scholarship to help with tuition.