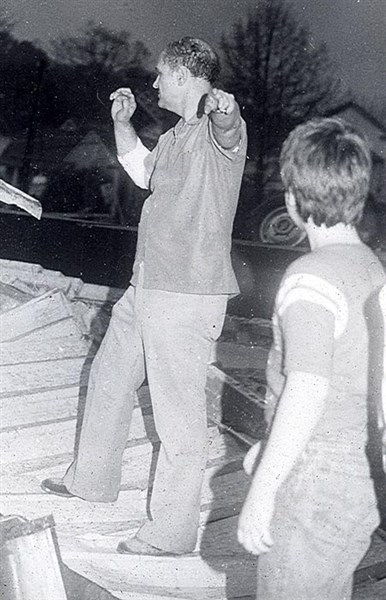 Jimmie Jones directed searchers to an area in the wreckage of his store where some of the victims were thought to be trapped in the aftermath of the tornado. Lance Humphreys (right) was 10 years-old when the storm struck. – Herald Photo 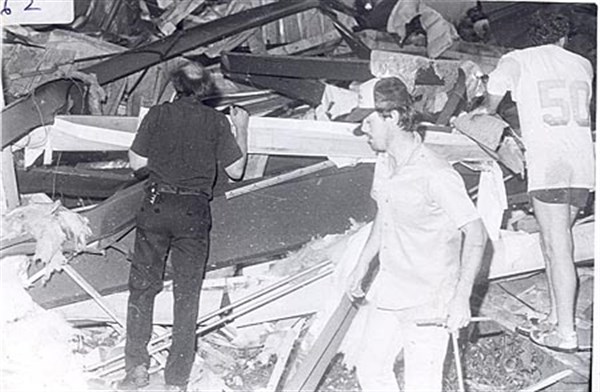 Craig Hart (left) and Michael Scroggins (center) were among searchers looking for trapped tornado victims in the wreckage of Jones Supermarket on Central Street minutes after the twister hit. – Herald Photo


WATER VALLEY – Three decades have passed since the devastating 1984 twin tornados and while memories have faded for some, the events of the day are still vivid to many who experienced the storm.
The twisters focused a good deal of fury on Central Street where six businesses were demolished including Jim Buford’s service station, the Southland service station, Mr. Quik convenience store, C. W. White’s self-service station and office complex, Jones Supermar-ket, and Boyd’s Western Auto.
Maggie Caldwell and her family were shopping in Jones Supermarket on that Saturday afternoon before Easter and she and her nephew, Eric Riley, talked about their experience in a March 1994 interview, ten years after the storm.
Mrs. Caldwell said that when she got to the checkout it was really lightning and thundering.  “I heard the siren go off and I went to the window and looked out. It looked like smoke boiling up and I thought it was something on fire.”
She began to see debris flying through the air as storeowner Jimmie Jones ran to the front yelling for everyone to “hit the floor.”
She said that Jones went outside trying to get people to come back into the store. “They were running in trying to find shelter.”
Meanwhile, her nephew, Eric Riley, was parking the car. He said it was pouring down rain and then suddenly stopped. “Everything got quiet.”
The break in the heavy rain gave him a chance to go into the store. It started to rain and hail, he said, as he and friends DeMarc White and Bob Brown looked out the front window. “We looked over First Baptist Church and we could see this big whirl wind…the tornado…coming with all of the debris. Mr. Jones said for everyone to take cover.”
Riley got into one of the checkout stands. “I heard a rumbling like a locomotive. All of a sudden everything was down.”
He blacked out for a few seconds and when he came to, all he could see was rubble all around. “Very few people were moving. A few people were running through the parking lot.”
One of the people running was his friend, Bob Brown. “His shirt was bloody,” Riley said.
He described being covered with concrete blocks and having to use right arm to remove them since his couldn’t move his left side. When he was able to free himself he tried to remove rubble from a woman who was trapped, but he became exhausted and unable to continue. He managed to crawl out of the rubble and went out into the parking lot.
“I looked at the car and it was wrapped around one of the big poles. I turned around and looked back toward the rubble and saw my cousin Kim running toward me.”
Riley said that he began to black out again and remembers someone catching him as he fell. He was taken to Yalobusha General Hospital and saw people being treated in the hallways. “Folks couldn’t find their relatives. It was rough, it really was.”
He was examined at YGH and sent to Oxford in a van because all of the ambulances were in use.  Riley said that while he was at the hospital there, the man next to him died. After being treated for his dislocated shoulder and cuts, he was allowed to leave to make room for those more severely injured.

Taking Cover
Right before the tornado hit the Jones store, Mrs. Caldwell said that she and her mother and daughter, Kim, were on the aisle near the pet food trying to find someplace to lie down.
She said that everything was over with very quickly. “My mother was covered up under all of that canned dog food. We couldn’t pull her out, so we had to dig her out.”
Mrs. Caldwell said that she received a cut on the head, but her daughter was uninjured because she protected her with her body. Her mother was bruised by the falling cans.
She said that the she, her mother and daughter were taken to Yalobusha General Hospital and from there to the Bruce hospital for treatment.
She described the trip back home as difficult because of all the debris. “There were tree limbs all over the road. They had to pull trees out of the way.”
The aftermath of the storm was rough for the family, according to Riley. Even the first night, when it would thunder or the wind would blow, he would begin to shake. “It lasted for several weeks after that.”
“Thank God we are gradually getting ourselves back together,” said Riley.

Seven Killed
The Caldwell family was among the 10 to 20 people were reported to have been in the store when the violent winds hit. They were lucky. Jennie Tolbert was killed in the grocery store when a meat display case turned over on her. She was one of seven who died that day. The others were Lucille Turner, Levi Benson, Margaret Mitchell, James E. Allen, Ruby Burden, and Aileen Black.
The double-barreled twis-ter struck just before 5:30 Saturday evening, touching down near Prospect Drive and Dupuy Street. The storm moved northeasterly doing great damage on Panola, Wagner, Herring, Church, Price, Clay and Market Streets.
After hitting Central Street, the storm moved across Boyd and Jones Streets before leaving Water Valley and struck again in the Jumper’s Chapel community. The path of the storm was up to a quarter-mile wide in areas. Damage occurred on either side of the main track as the funnels came down and went up again.
The city had been under a tornado warning since 4:50 p.m. Police Chief John Watson, stationed at the National Guard Armory on Wise, saw the twin funnels approaching and ordered the siren blown again. It sounded for less than three minutes before power was knocked out.
Yalobusha General Hospital Administrator James Ivy told reporters that 83 patients had been admitted as a result of the disaster. The hospital usually had no more than 25 patients.