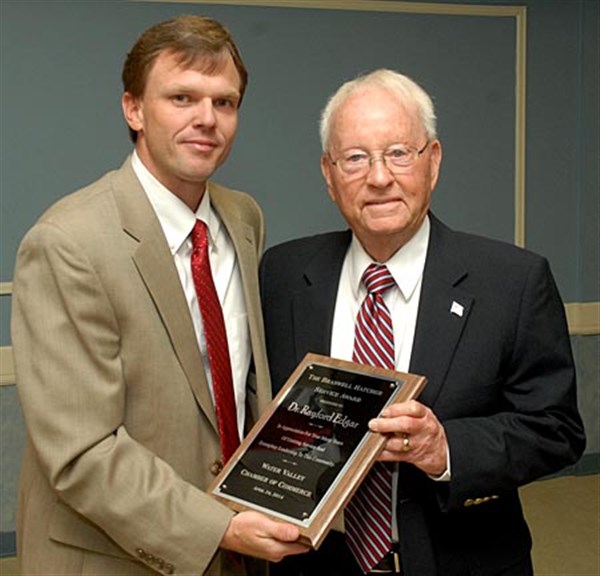 Chamber President Tyler Hill presents the Braswell Hatcher Community Service Award to Dr. Rayford Edgar at the annual banquet last Thursday. Dr. Edgar is the sole surviving member of the original board of directors of the Water Valley Area Chamber of Commerce. – Photos by Jack Gurner 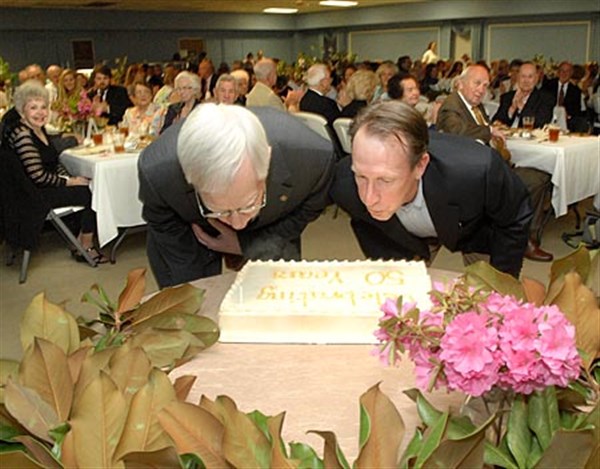 Binnie Turnage and Keith River, representing Turnage Drug Store and Mechanics Bank (top photo), had the honor to blow out the candles on the cake celebrating the Chamber’s 50 years in existence. 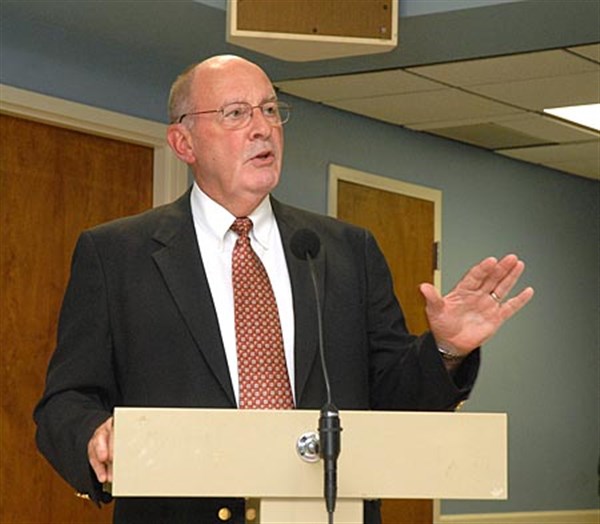 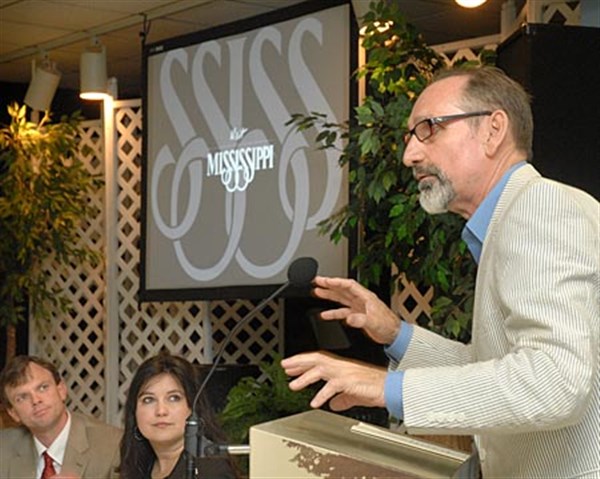 Malcolm White (right) had praise for Water Valley, calling the city a shining example. Below left are Chamber President Tyler Hill and his wife, Jency. Behind the screen in the center resided the “Mysterious Connor,” Connor Gray, who worked the audio-visual presentation. 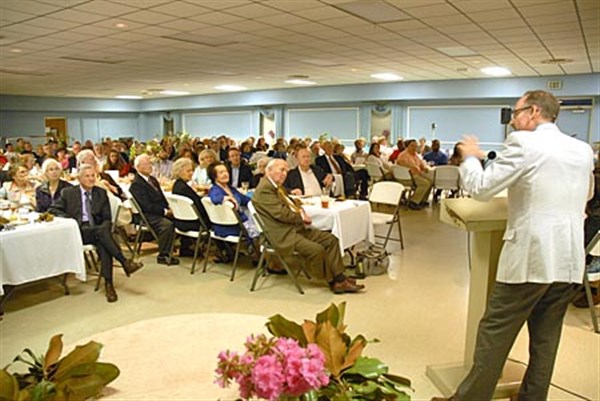 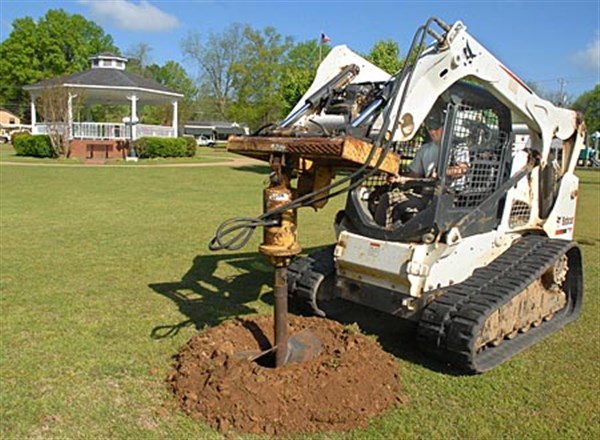 Water Valley native Chad Fischer digs a hole for one of the seven oak trees planted in City Park by the Water Valley Area Chamber of Commerce in memory of the seven people killed during the 1984 tornado. Below, Brian Cook (right), also of Michael Hatcher and Associates of Olive Branch, prepares to place one of the trees. 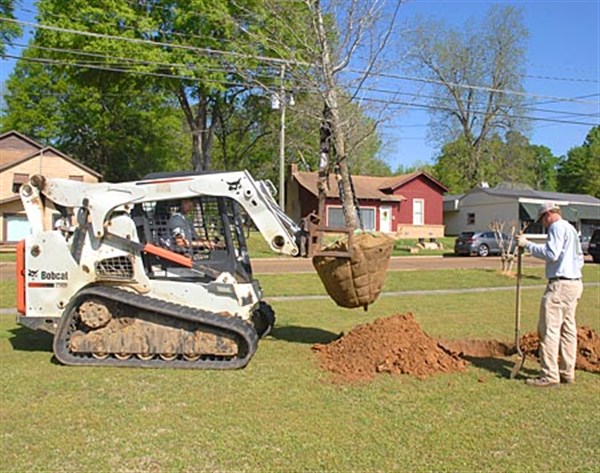 
WATER VALLEY – The sole surviving member of the original board of directors of the Water Valley Area Chamber of Commerce has received the Braswell Hatcher Community Service Award.
Dr. Rayford Edgar was presented the award by Chamber President Tyler Hill at the organization’s annual banquet, held in the fellowship hall of the First Baptist Church last Thursday evening. The event commemorated the chamber’s 50th anniversary.
Hill read a history of Dr. Edgar’s community service, which started early when Dr. Edgar was just a nine-year-old in the Boy Scouts.
Dr. Edgar is currently an active member of the Lions Club. He was a Jaycee, a member of the Mississippi Board of Health, the Water Valley School Board and Mississippi Veterans Affairs Board and a number of other service groups. He has served in several positions at the First Baptist Church including deacon.
Dr. Edgar served in the U. S. Navy during World War II and he and fellow veterans on the Honor Flight made national headlines for storming the World War II Memorial in Washington, D. C. during the government shutdown last October.
Dr. Edgar said that he was once asked why he had spent so much of his time working for Water Valley. “I’ll tell you why. I love Water Valley.”
Earlier in the evening, Hill thanked everyone for attending and for supporting the chamber’s mission, which he described as “promoting commerce, industry, jobs and the overall well being of our community.”
He explained that the chamber turned 50-years-old this year and he asked Keith River and Binnie Turnage to come to the front. River represented Mechanics Bank and Turnage represented Turnage Drug Store, the only two businesses still in operation that were charter members of the organization.
The Sharecroppers led the group in singing “Happy Anniversary” to the chamber as River and Turnage blew out the candles on the anniversary cake.
Hill then announced the 2014 Elliott Scholarship recipient, which is given to recognize an outstanding young person in the community. He noted that the scholarship is not based on grades nor is it based on need. It is given solely for community service. Chosen from the nine candidates was Kelsey Neely, a senior at Water Valley High School.
The chamber president also announced that in memory of the seven people killed during the devastating tornado of 1984, seven oak trees would be planted in City Park beginning the next morning on Arbor Day.
Hill said that the chamber couldn’t control the weather in August, but hoped the trees would eventually provide shade that would make it a little more comfortable during Watermelon Carnival. “Hopefully 30 years from now we will be enjoying not only the look but the shade from these trees we are going to plant,” he added.
Hill also announced the new chamber officers and board for the next year. He  will continue as president for another term alongside old and new board members Charlie Edwards, Tonya Eubanks, Michael Fonte, Glenda Gordon, Tony Hill, Kimberly Ingram, Nell Jobe, Dr. George Orndorff, Dale Tyler, Michelle Washington and Charmie Weeks.
In closing, Hill said that the chamber wants to challenge everyone to promote and support local business by shopping with them as much as possible. “When you shop local first, you not only help our neighbors and friends stay in business, you also assist in keeping our town occupied and clean. Before you consider going anywhere else, look in the Valley first.”


WATER VALLEY – Missis-sippi’s Director of Tourism described the city and the advances made here during the past few years as a Mississippi success story.
“We brag about you all the time,” Malcolm White of the Mississippi Develop-ment Authority said during his remarks at the Water Valley Area Chamber of Commerce Banquet last Thursday.
White added that it is because of the success of communities like Water Valley that the MDA created a Bureau of Creative Economy. “It is an important part of our economic development strategy in Mississippi to tell Mississippi’s authentic, real story.”
In the past, we have allowed other people to tell our story, according to White. “I have always believed they have gotten it wrong,” he said. “Through the creative economy we have an opportunity to get it right and to tell it in our own voice.”
“That is to a great extent what I see in Water Valley,” White continued. “I see a long history of stability, of dedication, of service, of commitment to community, to faith, to family. And then we add this creative component, the work that is being done by Main Street and all of your merchants who are getting all of this publicity from all over the place.”
“It is this balance between the historical and the old and these new creative, entrepreneurial types who have come here that gives you this envious position you are in,” he continued. “When we travel around Mississippi and go to small communities, they say ‘we want to be like Water Valley.’”

Historical And Creative
White described visiting the Casey Jones Museum earlier in the day and then walking across the street to the BTC Old-Fashioned Grocery and the art galleries. “That is a great example of combining the historical with the creative,” he said.
“My friends, you have arrived at what everybody else is trying to figure out; how to combine these forces,” said White. “I am here today to say to you, congratulations. Job well done. When you grow together, great things can be achieved.”
He then showed a series of TV commercials and print ads that are part of the Mississippi Homecoming campaign in conjunction with Governor Phil Bryant’s creative economy proclamation.
“If you don’t think you are on the right track in Water Valley, ask your governor why he has proclaimed 2014 as the Year of the Creative Economy in Mississippi,” said White.
He explained that so many of the things we have taken for granted over the years – from the blues to our historic architecture to food and the civil war – have become the things with which people all over the world have become fascinated.

Surviving Controversy
At the end of his talk, White said, “you all know you are at an interesting place. You have this interesting conflict about Walmart.”
“You know what? Communities grow through struggle,” he noted. “And when we have conversation about options and choices, as a town and as a community, we grow, we learn, we make choices. Sometimes they are very difficult.”
White said that one thing he knew about politics is that it is local, “and this is your decision to make. And, you will make a decision. And, the day after you make a decision, you will get up and go back to your shops and go back to the chamber and go back to the mayor’s office and you will go to work being Water Valley.”
“All I can say to you is that today you are in the catbird seat. You are the envy of many communities in this state. You deserve accolades; you have made great progress.”
“You are still a shining star of how it works it Mississippi.”


WATER VALLEY – The city’s finances are sound, Mayor Larry Hart said during his “state of the city address,” an annual tradition at the Chamber of Commerce banquet.
“I have been trained to be brief and short,” he said with a grin as he began his remarks last Thursday evening.
The mayor told attendees that he appreciated everyone bearing with the city as work progressed on the downtown sewer project. “We tore up a big part of town through the winter months and we are very close to completion now.”
Hart said that city officials hope that by the beginning of summer it will be finished “just in time for us to start ripping up Main Street.”
The mayor explained that the street would be resurfaced “to compliment a lot of the work that has gone on with our Main Street organization to promote Main Street. That’s about a $150,000 project trying to make our downtown a lot nicer and a lot prettier.”
Hart noted that the city is about 60 to 70 percent complete on installation of smart meters for both electricity and water, about a $600,000 project. “These meters can be read from city hall without the traditional man walking around with his little book.”
Another project that the mayor promoted was the agreement with Tallahatchie Valley Electric Power Association to build a substation in the southwest corner of the industrial park. “We’re going to construct a transmission line that will bring power to our city.”
Currently there is only one source of power to the city and the new line will provide a second source of electricity, Hart said. “By the fall of the year we’ll have this project completed and I hope we’ll find a lot of comfort in knowing we have other sources of electricity coming into our community.”
The mayor completed his remarks with an update on the city’s finances, which he described as sound. He added that property taxes were performing as expected, as are our sales taxes. “We’re right on course. We’re pleased that our local economy is functioning well.”
Hart commented that water rates might have to be tweaked at some point in the future because of the mandates under which the city’s wastewater has to be handled. “Chemicals we have to treat our wastewater with have gotten very expensive.”
The mayor also said that he expects to see an increase in TVA electric rates, which would translate to higher rates charged to the consumer.
“In closing I would like to remind you that we are blessed to have all the civic clubs we have. The various clubs we have do a fantastic job of supporting you and our community,” said Hart. “Water Valley is known across the state and we’re getting to be a pretty famous operation up here.”