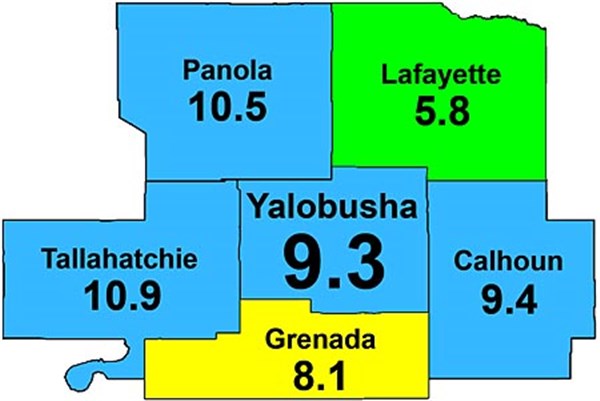 
WATER VALLEY – The un-employment rate is up and down for the first three months of the year, going from 9.3 percent in January to 9.4 percent in February and back down to 9.3 percent in March.
The latest figures from the Mississippi Department of Employ-ment Security show that Yalobusha County was well above the state average unemployment of 7.9 percent in March.
According to MDES, 5,000 people were employed during the month out of a labor force of 5,510 as compared to 4,950 employed during February out of a labor force of 5,460. A year ago in March 2013, 5,050 people were employed.
The labor force is defined by MDES as the estimated number of people eligible for work or actively seeking employment. But, those figures don’t include people who have given up looking for work or are no longer participating in the labor force.
Just four years ago in March 2010, the unemployment rate was at a high of 13.6 percent. And, just last year, the rate was 9 percent as it was in March 2012.
In comparison to the five surrounding counties, the Yalobusha unemployment rate was less than Panola (10.5), Tallahatchie (10.9) and Calhoun (9.4); but more than Grenada (8.1) and Lafayette (5.8).
Initial unemployment insurance claims went up over the month, going from 34 in February to 43 in March. But, continuing claims went down from 558 in February to 525 in March.
The March 2014 initial claims (43) are just one higher than in March 2013 (42), but the continuing claims are considerably higher (525) than the year ago figure (427).
Mississippi’s unadjusted unemployment rate for March 2014 was 7.9 percent, decreasing one-tenth of a percentage point from the previous month’s rate of 8 percent. When compared to the March 2013 rate of 8.5 percent, the rate decreased six-tenths of a percentage point.
The number of unemployed remained the same over the month, while the employed total increased 4,800 from the prior month.
The Nation’s unadjusted unemployment rate for March 2014 at 6.8 percent decreased two-tenths of a percentage point over the month, and was eight-tenths of a percentage point below the year ago rate of 7.6 percent.
For the month of March 2014, 28 counties in Mississippi posted unemployment rates less than or equal to the state’s rate of 7.9 percent.
Rankin County posted the lowest unemployment rate for the month of March at 4.7 percent followed by Scott and Lamar Counties at 5.4 percent. Issaquena County had the highest unemployment rate for March at 17.5 percent followed by Clay County at 17.2 percent.