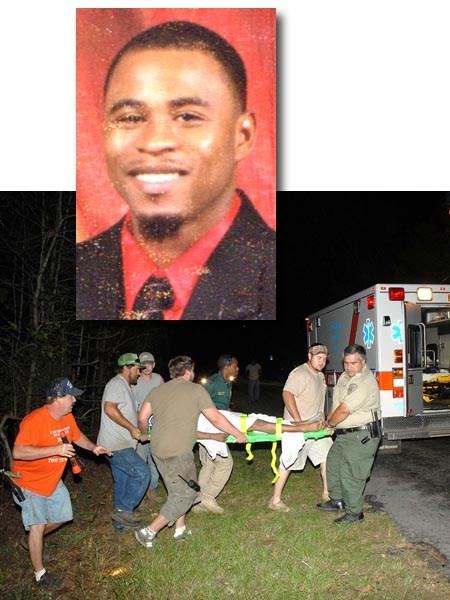 After receiving serious injuries to his head back in 2011, Marcus White was able to tell his mother that two men had jumped him. White’s comments came shortly after he was loaded into the ambulance and he was not able to talk again. He remained in a nursing home for more than two years after the assault until his death Tuesday. – File Photo by Jack Gurner


GRENADA – A 2011 assault on a Water Valley man is now classified as a homicide after the victim passed away Tuesday at Grenada Lake Medical Center.
Sheriff Lance Humphreys reported Marcus White died as a result of injuries sustained in the assault, which occurred on Sept. 1, 2011, when he was beaten with a two-by-four and an iron pipe. White was then left for dead in a ditch on County Road 25.
“We have worked this case actively for almost three years, we don’t want to let it go cold,” Humphreys told the Herald. “Somebody out there knows something, we just need a break,” the sheriff added.
White’s injuries left him unable to speak and landed him in a nursing home where he resided until his death.
In May, 2012, White’s mom told the Herald that White was left unable to walk or talk after the assault. He was treated at the Regional Medical Center in Memphis for almost 10 weeks, before he was released to Grace Rebah in Grenada.
“He was beaten and he was robbed,” she told the Herald. White was working at Water Valley Poultry at the time of the assault, a job he had for almost eight months.
“He was a hard worker, he was respectable,” His mother also said her son lived with her on Burkes Street before the incident.
Morgan was able to communicate with her son briefly in the back of an ambulance before he was flown to the Med the night of the crime.
“They told me he wasn’t going to respond,” Morgan said. “But I told him, remember God has you.”
“He said, ‘okay momma.’”
“He was able to tell police that two guys had jumped him,” Morgan said.
White has not been able to talk since then.

The Crime Scene
Humphreys said his deputies found White at the bottom of a steep hill near County Road 25 after someone called 911 and alerted authorities of his whereabouts.
“It took deputies several passes up and down the road before they located him. “They heard him cough, that was the only thing that alerted them,” Humphreys recalled.
Humphreys believes whoever contacted authorities has intimate knowledge of the crime, but said leads have been slim in the case.
What authorities are missing is physical evidence in this crime. They were unable to lift workable fingerprints at the crime scene and believe he was dropped out after he was beaten.
“We have interviewed a number of people in this case, some even multiple times,” the sheriff told the Herald.