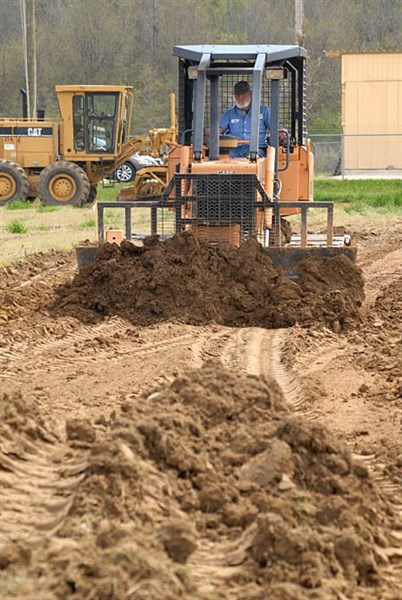 
COFFEEVILLE – Dirt work is expected to be completed this week for the new jail site on Hwy. 32 East, just as county officials will review the final plans for the facility.
During Monday’s Board of Supervisor meeting at the Coffeeville Courthouse, supervisors spoke with the Benchmark Construction President David Marsh via telephone about reviewing the final jail plans.
“We have not ever seen a full set of plans and specifications at this table,” District Three Supervisor Lee McMinn told the group before Marsh was contacted. “We have all seen floor plans. But we have never seen elevations or specifications,” McMinn added.
“We do have the final plans and I am getting the colored elevations today so everyone can sign off on those,” Marsh told the board during the telephone conference. Marsh also explained that all of the supervisors had seen the floor plans and approved them, including Sheriff Lance Humphreys.
Marsh added that he would hand deliver the plans and specifications later this week.
“We are anticipating having the dirtwork completed this week. We don’t want to hold you up on starting. When do we need to set a recessed meeting to approve these plans and specs?” McMinn then asked Marsh.
“We like for that dirt to sit just a little bit,” Marsh answered. “We have things in motion so if there are any tweaks, it won’t delay us,” he answered.
A May 15 recessed meeting was  set to approve the plans. District Two Supervisor Amos Sims presided over Monday’s meeting in the absence of Board President Tommy Vaughn.

About The Jail
The new jail will house a maximum of 65 county inmates. The county also plans to build a separate metal building adjacent to the jail to house up to 25 non-violent state inmates.
Financing for the jail was secured last November
when supervisors agreed to borrow up to $2.6 million to fund the jail in a lease-purchase arrangement.
Supervisors have also allocated $430,000 from county coffers for the project, pushing the total cost of the jail to over $3 million.
The $2.6 million debt will be repaid over 20 years at an annual cost of an estimated $184,000.
That annual $184,000 payment is already in the county budget after supervisors agreed to retain millage during the last two fiscal years that had been previously allocated to a hospital bond payment the county was paying.
Supervisors have also identified an estimated $93,000 in additional taxpayer money that will be needed to fund the actual operation of the jail each year.  Barring substantial new growth in the assessed value of the county in the coming fiscal year, that money will have to come from a tax increase or from cuts made in other departments.