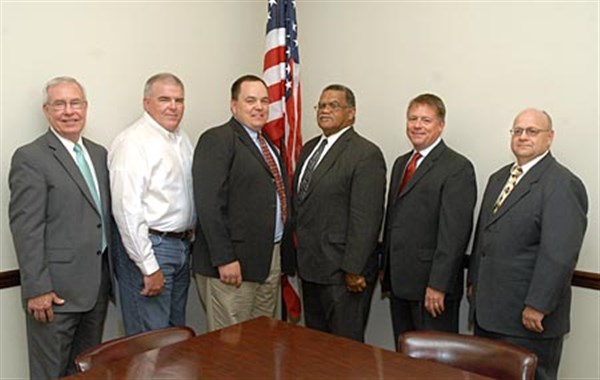 
WATER VALLEY – Approving the fiscal year 2015 salary schedule was the first order of business in an otherwise routine meeting of the school board trustees Monday night.
District Business Manager Randy Goodwin told trustees that the only difference from the last fiscal year to the next fiscal year is the teacher’s salary scale, which will include the recently passed pay raise.
Teachers in Mississippi are getting a $2,500 pay increase over the next two years in addition to normal annual raises. The bill, signed by Gov. Phil Bryant last month, includes a $1,500 raise July 1 and a $1,000 raise in the 2016 budget year.
Bryant told reporters gathered at the Capitol for the signing, “What we are trying to do with this bill today is get the best and the brightest into the classroom.”
According to published reports, the raises will cost $60 million the first year and another $40 million the second year. Mississippi’s average teacher pay was $41,994, the second lowest in the nation above only South Dakota, according to the National Education Association.
Among other actions at the meeting May 5, trustees:
• Approved an updated wellness plan based on new standards so that the district can qualify for a school nurse grant of $50,000 each year for the next five years.
During a discussion of some of the new nutritional standards, Superintendent Kim Chrestman told trustees that many schools are complaining of having problems meeting the standards because suppliers are unable to provide enough of the wheat products required.
“Another thing is that over 50 percent of it is going into the garbage and not being eaten,” Chrestman noted.
• Approved a field trip by the gifted class to the Lichterman Nature Center, part of the Pink Palace Family of Museums in Memphis.
• Heard the superintendent’s report from Chrestman, who informed trustees that as they were meeting Monday evening, the Davidson Elementary School band students were joining the WVHS band in a spring concert at the city auditorium.
“The 6th grade band has enjoyed a successful year and many of the students look forward to moving into the junior high band program this fall at WVHS,” said the superintendent. “These students have one more year of preparation before participating in high school band.
He said that on Thursday and Friday of last week, fifth grade students enjoyed a concert by the high school band and were introduced to a variety of instruments during band recruitment days. “Hopefully many of the students will join the band program.”
Chrestman added that Dr. Glen Kitchens and his staff would like to thank everyone who has supported DES during this great but challenging school year.
The full text of Superintendent Chrestman’s report will be included with this story on the Herald’s website at www.yalnews. com.
The next meeting of the district board of trustees will be held May 19 beginning at 6:30 p.m. in the meeting room of the district office on Markette Street.


As we meet tonight our DES band students are joining with the WVHS band students to present the spring concert.  The 6th grade band has enjoyed a successful year and many of the students look forward to moving into the junior high band program this fall at WVHS.  These students have one more year of preparation before participating in high school band.  This past Thursday and Friday, 5th grade students enjoyed a concert by the high school band and were introduced to a variety of instruments during band recruitment days.  Hopefully many of the students will join the band program.
5th grade students will take the MCT2 science test this Wednesday.  Students have worked very hard and have practiced assessing in the school labs.  The test is computer based.  Best wishes to these students as they sit for this exam.
Second grade students who earned an incentive for reading will go to Avant’s Park on Thursday.  Students in all 2nd grade classes were eligible to earn this field experience through the AR program.
In one week (May 13-15, Makeup on 16th)DES students will take MCT2 assessments in Math and Language Arts.  Encourage the students throughout our community to do their best on the MCT2.  In preparation for the MCT2 the DES student council is sponsoring “Color Days” throughout this week.  Students are encouraged to dress in a different color each day and live up to the slogan of the day.  Today students wore green and were challenged to be “Mean Green Thinking Machines.”
PBIS is ending the year with a Magic Show at the City Auditorium.  Students who have gone the full year without an Office Discipline Referral will be bused to the show on Thursday, May 15.  This should be an exciting day for these students.  We are proud of them for going a full school year with no ODR’s.  For the month of April, students with no ODR’s enjoyed Cotton Candy during their recess today.
Fourth, fifth and sixth grade students will participate in and enjoy a peer talent show on Friday afternoon May 16th at the end of MCT2 week.  We look forward to enjoying this display of talent from our students.
Dr. Kitchens and his staff would like to “Thank” everyone who has supported DES during this great but challenging school year.
Water Valley High School will be taking their Subject Area Testing is the week (May 5-9).  English II, Monday; English II Makeup, Tuesday; US History, Wednesday; Algebra I, Friday; Biology I, Friday.  We wish all students good luck on the state testing as they have put a lot of work and effort into the preparation for these exams.
The School Board and I wish the Water Valley High School Band and the parents an enjoyable evening as they have their end of the year concert tonight.  Several of the board members and I had planned to attend the concert, but unfortunately we have a board meeting.  Best wishes.  I am sure parents are proud to see them perform after all the hard work preparing for the concert.
Water Valley High School Academic Awards will be held Tuesday, May 6th at the Civic Auditorium.  Congratulations to all award winners and their families.  Teachers, parents, and family members are invited to celebrate the successes of these students.
Congratulations to the Water Valley Softball Team.  They have had an outstanding season.  They were Division Champions and had several players sign college scholarships.  Their season ended in the state playoffs with Mooreville last week with a 17-8 record.