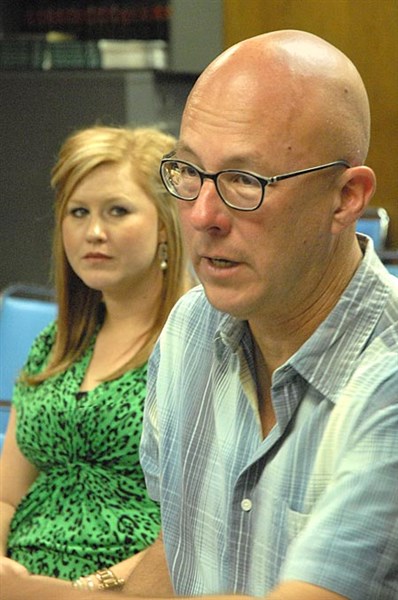 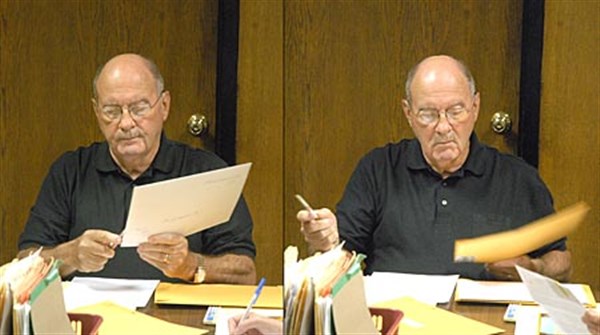 Mayor Larry Hart wielded a small knife to open backhoe bids, which were taken under advisement. 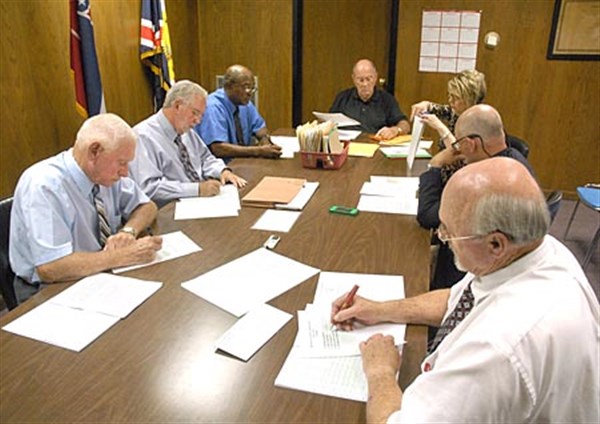 Aldermen write down bid amounts for a new backhoe for the street department. Alderman-at-large Donald Gray is present, but out of frame to the right. – Photos by Jack Gurner


WATER VALLEY – Yalobusha County’s new extension agent has hit the ground running in her new job and is already involved in economic development projects in the city.
Allyson Coleman, Extension Service Community Resource Development Agent, was introduced to aldermen at their first-Tuesday meeting last week by Mickey Howley, director of the Water Valley Main Street Association.
Howley explained that Coleman’s job is brand new, having just started April 1. “It’s a new program from Mississippi State. She is the first person in the program and we are the first county in the state to get it.”
Coleman’s position will be similar to other Extension Service agents, serving as a liaison between the wealth of resources and expertise at Mississippi State University and Yalobusha County. Her duties will include educational programming in agriculture and natural re-sources, family and consumer education, 4-H youth development, and enterprise and community resource development.
Howley said that Coleman is already involved with two projects in Water Valley. “She is working with us on the Farmers Market, getting the word out. The other thing she is doing is marketing with local businesses, especially businesses in food and agriculture. Mississippi State University has a lot of expertise in that area.”
As part of the marketing effort, businesses are being encouraged to join an intensive six-month program on e-commerce, which will be followed by a six-month evaluation period. Already three businesses have signed up, he added.
In other news from Main Street, Howley said that the organization and BorgWarner were cooperating on a recycling program. Eighteen businesses – right in the center of town – had signed up. Charlotte White is the liaison between WVMSA, BorgWarner and local businesses.
Among other actions May 6, aldermen:
• Took under advisement bids for a new backhoe for the street department. Aldermen had agreed to the purchase at their January meeting.
As Mayor Larry Hart wielded a small knife to open the bids, City Clerk Vivian Snider read the five bid amounts that ranged from a low of $77,618 to a high of $88,999. Hart said that city officials and Street Department Supervisor Mike Scroggins would look over the bids and take action at a special called meeting May 16.
• Paid an invoice from the Crow/Martin Law Firm for $1,930.60.
• Reappointed Mayor Hart to serve on the North Central Mississippi Regional Rail Authority. Along with representing the city, the mayor also serves on the authority’s executive committee for the county.
• Heard the mayor read a note from attorney Trent Howell thanking city officials for remembering his family on the death of his father, Hershel Howell.
• Were informed of the city-wide cleanup day scheduled for this past weekend by a committee of the Town and County Garden Club. Officials were informed that they would be expected to use their pick-up trucks to haul collected trash from their wards to the central collection point behind city hall.
• Scheduled a special called meeting for Friday, May 16, to open bids on the piece of property declared surplus on Central Street. At the same meeting, aldermen will take action on the backhoe bids.
The next regular meeting of the mayor and board will be June 3 in the boardroom at City Hall beginning at 6:30 p.m.