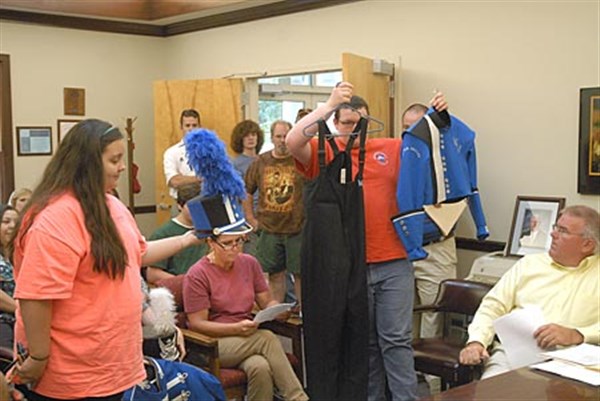 School Board members were shown an example of the new band uniform that would cost $27,405 for 70 sets. Band boosters were also requesting a yearly budget of $10,000 from the district to support the growing band program. 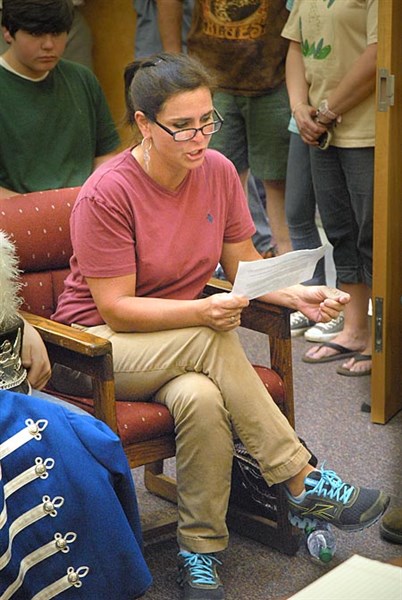 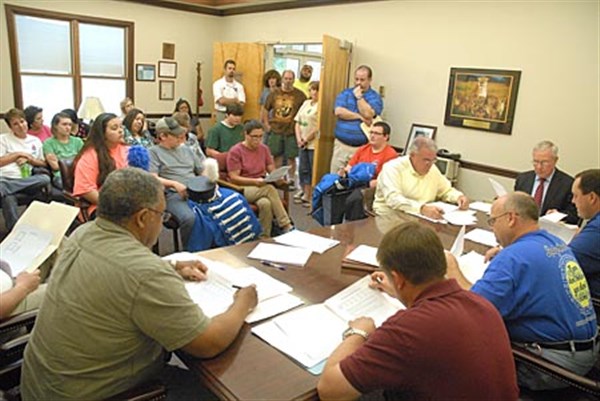 School board members followed along as Stark gave a breakdown of the costs of outfitting the band. 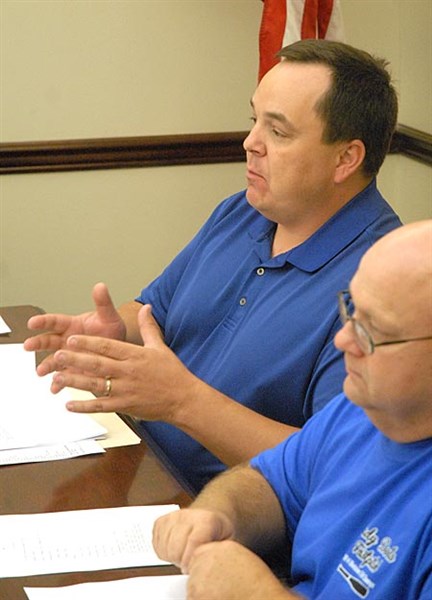 
WATER VALLEY – Band boosters are seeking financial help from the school district to purchase new uniforms and to provide a yearly budget for the newly reinvigorated band program.
About 20 assorted band booster club members, parents and band students appeared before the school board Monday night asking for $27,405 for 70 new uniforms and a yearly budget of $10,000.
But, their request may have come at a bad time. Later in the meeting it was announced that four teacher positions have been eliminated for the next school year because of a reduction in funding.
Band booster president Charla Stark read a prepared statement that explained the band boosters’ organization alone could no longer meet the financial needs of the growing band program. “As of right now there are not enough uniforms to outfit next year’s high school band and definitely not enough to outfit the high school band in two to three years,” she said.
Figures provided by the boosters showed that the high school band had grown from 31 members to 50 and is projected to have over 60 members in three years. “The band program as a whole has grown from 54 members to almost 100,” Stark added. “And, it is projected to reach around 120 in three years.”
She noted that new uniforms were only one of the needs of the band program. “We also have a desperate need for new percussion instruments and equipment for both the marching and concert bands.”
The estimate for new percussion equipment is $36,283, according to Stark.
Adding to the financial woes for the booster club is the thousands of dollars spent over the past few years repairing old wind instruments.
“With the type of growth our program is experiencing and should continue to have the next several years plus the demands for new equipment, comes our need for a yearly budget,” said Stark.
“A yearly budget would allow us to do several things,” she continued. “One, reduce the financial burden on the band booster organization, allowing them to put money into savings so that in the future booster organizations don’t have to come and ask for help from the school district.”
“Two, gives the band program the ability to purchase the more expensive items that commonly parents are not asked to purchase such as tubas, bass clarinets, baritones, etc. And, three, give the band program the ability to do more.”
After Stark spoke, Trustee Casey Washington praised the work of Band Director Keith Morgan, who has brought the band up from a “shambles.”
“He’s got the support of parents and that is something that we lacked,” Washington said, and added that the band is a vital part of the school district.
Washington asked about the fund raising efforts of the boosters and encouraged the group to undertake additional money making projects. “There may need to be some extra effort.”
“We’ve got a lot of financial challenges that we are going to face,” he said, referring to the reduced amount of money the district would receive for the next school year.
Trustee Taylor Trusty added that a $10,000 budget didn’t sound like much when compared to the district’s $9 million overall budget. “But, we scrimp and save every penny that we can so that we can make improvements to the school.”
He said that the problem he had as a school board member with providing money to the band is that there are, by his count, nine other organizations that will be at the next board meeting asking for money.
Board president Lamar Burgess thanked the group for appearing and explained that the board was just getting into the budgeting process for the next school year. “We have to consider those other organizations as well as your own. We are a financially challenged district, but we try to do what we can with the resources we have.”