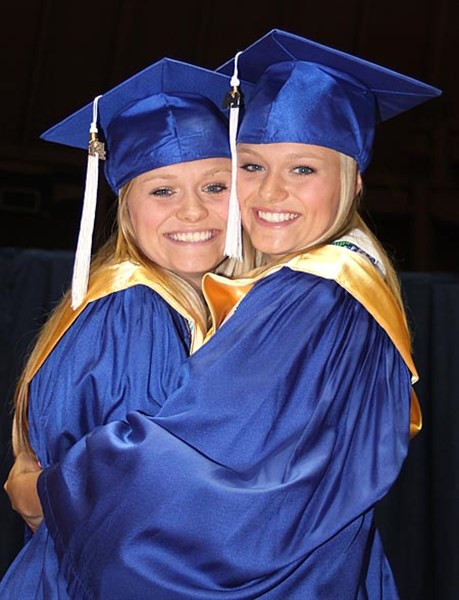 Twins Tyler Epes (left) and Shade Epes captured top honors in the Class of 2014. Shade is Valedictorian of the class and Tyler is Salutatorian. –Photo by Claudia Anthony


WATER VALLEY – When the final grades were tallied for the Water Valley High School’s Class of 2014, the GPA between the top two was only a fraction of a percent apart.
Twin sisters Shade and Tyler Epes captured the top honors. Shade was named Valedictorian with a 99.0306 GPA. Tyler is Salutatorian with a 99.0265 GPA.
The competition between the sisters started in sixth grade when Tyler got five awards for highest GPA and Shade received one award.
“I was devastated, I cried,” Shade recalled.
Their parents, Pierce and Andi Epes, cited that competitiveness as the driving factor that motivated the girls to success.
“It was always very, very competitive. They have probably pushed each other to where they are today because they are so competitive with each other,” Andi Epes said.
“They have been competing since they got here,” Pierce Epes added.
That also made for a tough balancing act for the parents.
“Sometimes it is hard to balance. You are happy for both of them,” Andi Epes explained.
The twins had flip-flopped as class leaders during high school and by the end of the junior year Tyler was leading.
“It was so close our counselor said she had nightmares about it,” Tyler said. “She knew how important it was to us.”
“I had accepted my fate, I was perfectly fine to be second,” Shade said about their standings at the end of their junior year.
They even competed on the ACT, a race Tyler ultimately won when she scored 27, one point higher than Shade.
“She got Star Student, so I really, really wanted valedictorian,” Shade explained.
Both girls also attribute their success to their teachers in Water Valley. And although they are extremely difficult to tell apart, they played it straight in school. Except for that one time on April Fools Day in seventh grade when they switched places with their principal’s permission.
They didn’t fool their classmates but only one teacher
Not surprisingly they will attend the same college, Covenant College in Georgia. They received academic scholarships and will play softball, a sport in which they both excel. They are both majoring in Physics and will minor in Biology.
They have even signed up for the same classes and will room together.
Shade made two trips to the campus of Covenant College before Tyler went. But when she went to the campus she was on board.
“It was,” Shade started. “Very important,” Tyler finished about their decision to stick together in college.
“When they finish their four-year degrees, they are going different routes,” Andi Epes added.
“We are going to transfer to Mississippi State. Shade will be working with one set of professors and I will be working with a different set,” Tyler explained.
The hard work for the sisters and the entire Class of 2014 came to fruition with the commencement Tuesday night.
In addition to the twins, other honor graduates include Shanterian Gaston, Katherine Crocker, Garrett King, Kelsey Neeley, Cody Greer, Cole Camp, Calla Trusty, Janu Patel, Mac Williams, Kala Reynolds, Dillon Zinn and Harley Sharp.