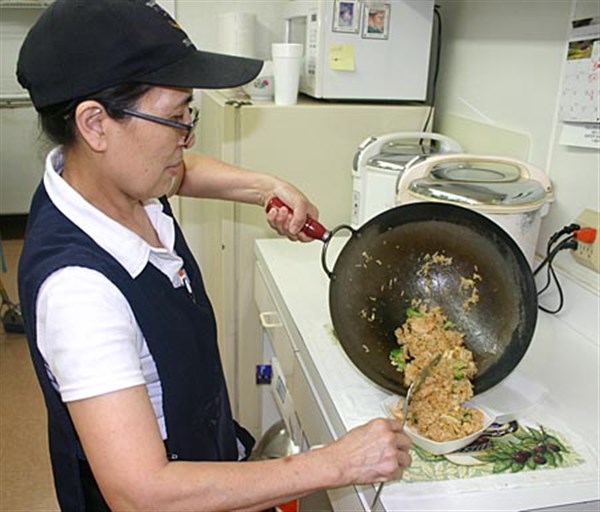 Nallie Terry prepares an order of shrimp fried rice for a customer last Thursday. After operating the business for 21 years, she is ready to sell the restaurant to new owners. – Photos by David Howell 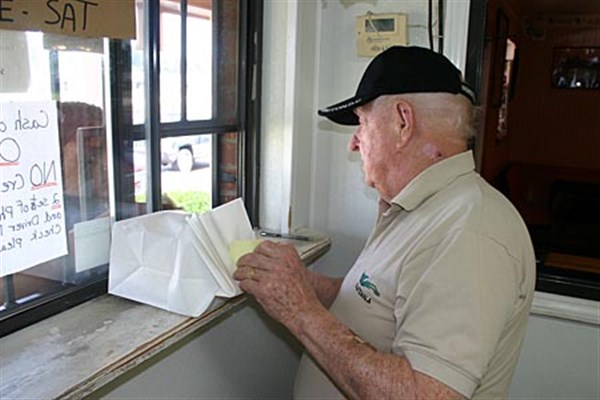 Don Terry works the register and window at Nallie’s Restaurant. 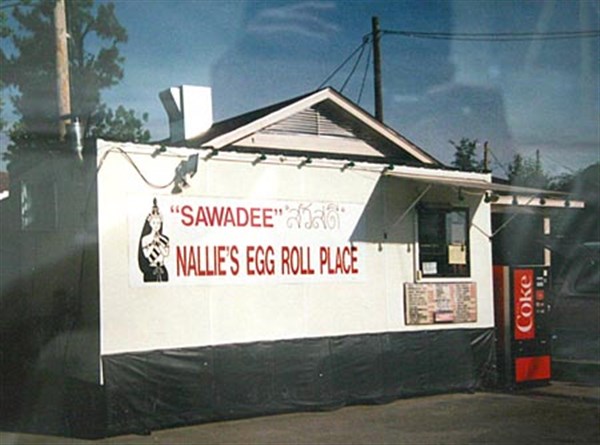 For the first year in operation, Nallie operated out of this 16-foot trailer. The trailer was parked on Central Street in the same location where their building was constructed to handle the growing business. 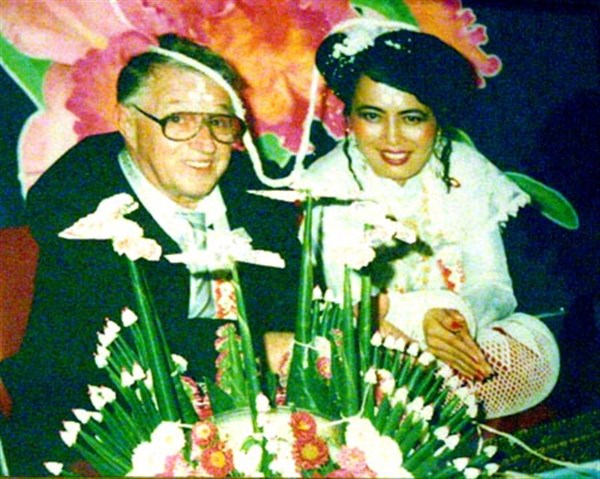 Don and Nallie Terry’s wedding photo, taken in 1988 after they married in her hometown, Chiang Rai, Thailand.


WATER VALLEY – The fried rice is her trademark, the rice comes from Thailand along with the mushroom soy sauce that gives it the dark color and distinct flavor.
For 21 years, Nallie Terry’s customers have enjoyed the fried rice, served with shrimp, pork or chicken, along with other dishes in her spotless restaurant in Water Valley.
Now Nallie, 60, and her husband, Don, who is 83, are ready to retire. Their building equipped with restaurant equipment is for sale and she would love to help the new owners continue the mixed menu that includes Thai food with southern food.
The couple started the business in 1993, first in a concession trailer. The trailer was parked in the same location where the building was constructed a year later after they needed a larger, permanent location.
Nallie and Don met in Singapore in 1987 and married a year later in her home town in Chiang Rai, Thailand. At the time Don was living in Atlanta, but he said they could make their new home back in Mississippi where he grew up, or in Atlanta.
After visiting both towns, Nallie made her decision.
“I love Water Valley, it looks like the town where I was born,” Nallie explains. “I tell my husband I like small town. I don’t like city.”
After the move, Nallie worked for two-and-half years at Big Yank, but found herself out of a job when the plant closed.
That was when Don discovered Nallie had a background in the restaurant business. She had worked in a hotel restaurant back in Thailand for four years and getting back in the restaurant setting come naturally for her.

Thailand Culture
The couple celebrated their 26th anniversary Monday. They have made more than a dozen trips back to her hometown during that time, but they are becoming less and less frequent. It’s an expensive trip and, like many seniors, Don has numerous appointments with doctors which makes it harder to strike out halfway across the world.
Their last trip was back in November and they saved $10,000 for it. The plane tickets alone cost $3,700.
Prior to that trip, it had been four years since they had traveled back to her hometown. They stay with her family, so that part of the trip doesn’t cost them. But Don explains where the costs really escalate.
“We usually wind up having a party. She foots the bill and treats everybody she knows,” he explains.
There is a reason it is important to enjoy food, family and friends–eating is a big part of the culture.
“At my brother’s house, they always have table for people to eat. Every day. People come and go, come and go. They eat all day long,” Nallie explains.
“Everywhere you go in Thailand, you have to eat. That’s what they do. If you go from house to house, you have to eat at every house,” Don adds.
“That is Thai custom,” Nallie agrees.
“They think you are starving, I guess,” Don said. “But they have everything in the world to eat over there that we don’t have here. A lot of good things to eat, especially the fruit,” Don recalls.
“He wants to move to Thailand and I don’t,” Nallie said. She adds that she would be open to splitting time between Thailand and Water Valley.

The Transition
Before they can argue about just where they will spend the final years of their life, Don and Nallie must first find new owners for the restaurant.
Nallie reports she will continue working until she can draw Social Security, but operating the restaurant takes more effort than she and Don can provide.
They have already scaled back their operations to five days a week, Tuesday through Saturday. They also closed the dining room and only serve to-go orders. They plan to keep the restaurant open until they find a buyer and Nallie will train the new owners for 30 days if they want. She is willing to work part-time longer.
The couple agree that whoever runs the restaurant will work hard. But the results can be a good living.
“If someone opens the dining room and opens six, seven days  a week, they can do really good,” Don explains.
“He needs some rest because he worked so hard for so long,” Nallie adds.