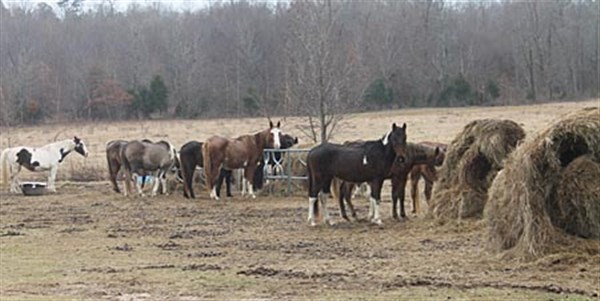 Photos provided by In Defense of Animals (IDA) shows some of the horses in the pasture were in better shape than others. At the time this photo was taken in February, IDA had provided hay for the horses. The man charged with 19 counts of neglect had provided low-protein hay for the animals during the harsh winter. – Photos Provided By IDA 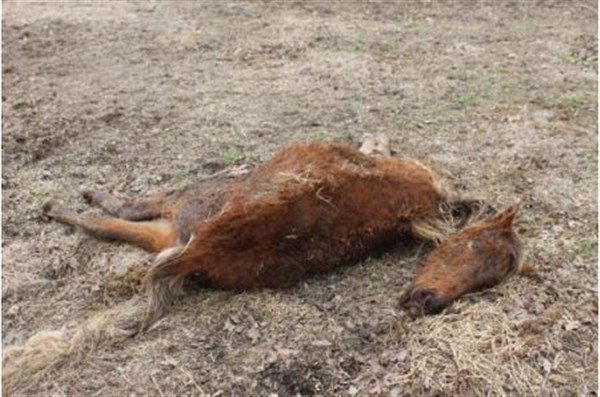 A second IDA photo shows a dead horse on the property.


WATER VALLEY – After pleading no contest to 19 counts of confining creatures without food or water in justice court, Ollie Judson has appealed his conviction to Circuit Court.
The charges were levied against Judson after In Defense of Animals (IDA), an international animal protection organization, seized 19 horses from a pasture on County Road 56 in the Sylva Rena community back in February.
Director of IDA’s Hope Animal Sanctuary Doll Stanley documented malnourished horses and several corpses in the pasture as the harsh Mississippi winter was nearing an end.
Judson’s attorney, James Powell III, told the Herald his client has decided to appeal the sentence. Judson did not have an attorney present during the hearing in justice court and hired Powell of Horan and Horan PLLC after the sentence was imposed.
Judson, who is 64, was sentenced to 50 days in jail, plus a fine of $100 and court costs of $203.75 per count, during the hearing in justice court held April 15, according to court records.
Powell said Judson did not own the horses nor the land and had been trying to take care of the animals. A family member actually owns the land and horses, according to Powell.
Frank Judson of Illinois was listed along with Ollie Judson on the initial seizure order presented to justice court before the 19 horses were seized. He has not been charged in the case.
Powell expressed concern with the appeal bonds set by Justice Court Judge Steve Riley.
Powell said each of the 19 counts was treated as a separate case and a $1,000 appearance bond and a cost bond of $803.75 was set for each count.
An appearance bond is a guarantee that the defendant will appear in Circuit Court for the appeal. If Judson doesn’t appear, the money is forfeited and a warrant for his arrest will be issued.
The cost bond guarantees court costs for the appeal.
“I have been doing this a long time and I have never seen bonds like this in justice court,” Powell told the Herald. “It was a total of $33,000. In my opinion that is outrageous for  misdemeanor offenses. Everybody has a right to appeal and to have a reasonable bond for the appeal.”
Judson posted a surety bond in the Circuit Clerk’s office to cover the cost for the appeal, according to court records.
Judson, Joyce Hall Judson, Freeman Willingham Jr. and Rubye L. Carr signed a guarantee to pay Circuit Court $12,897.25 for the court costs. Judson had already paid almost $2,000 in fines and filing fees, accounting  for the difference in the total amount of the cost bond.
A surety from Alright Bail Bonds was also accepted for the appearance bond.
The appeal date for the new trial is set for Sept. 29.