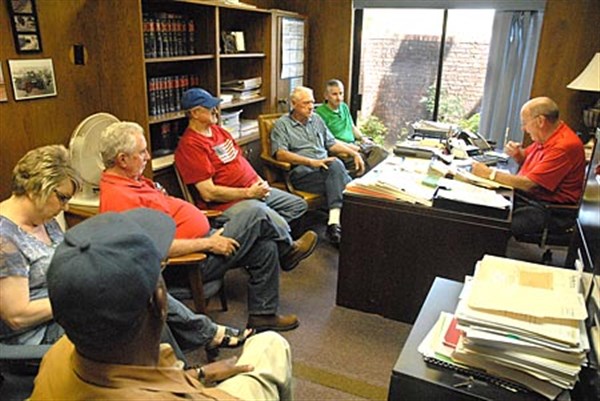 It was a little crowded in Mayor Larry Hart’s office with all five alderman on hand for a special called meeting last week. Although not specifically city business, the Mayor’s announcement that the state would overlay Highway 315 was well received by the aldermen. “It’s about time,” said Bobby Cox. – Photo by Jack Gurner


WATER VALLEY – Highway 315 from Water Valley to Highway 6 will be overlaid, probably beginning next month.
Mayor Larry Hart made the announcement during a special called meeting of the board of aldermen last week. The mayor said that he had talked with Northern District Highway Commissioner Mike Tagert who “shared the good piece of news.”
The 16-mile stretch of state highway had been the subject of numerous complaints as the surface deteriorated over the past several years.
The purpose of the special meeting was to approve a quote of 15,487.05 by Riverside Traffic Systems, Inc. of New Albany for striping downtown.
Among other actions at the May 21 meeting, aldermen:
• Approved BorgWarner’s annual warehouse tax exemption and a property tax exemption on a new line valued at $8,883,413.
The mayor explained that the property was installed before Dec. 31 of last year so it does qualify for the exemption and, he added, the county has already acted on it.
• Approved a tax exemption for Allied Group property valued at $133,500.
• Authorized John Crow of the Crow/Martin Law Firm, attorneys for the board, to attend a municipal seminar.
Earlier in the month, aldermen met for another special called meeting to approve a bid of $77,618 to purchase a backhoe for the Street Department.
The only other action at the May 16 meeting was to accept a $1000 bid for .033 acres of surplus city property on Central Street.
All five aldermen were present for both special meetings. The next regular meeting will be June 3.