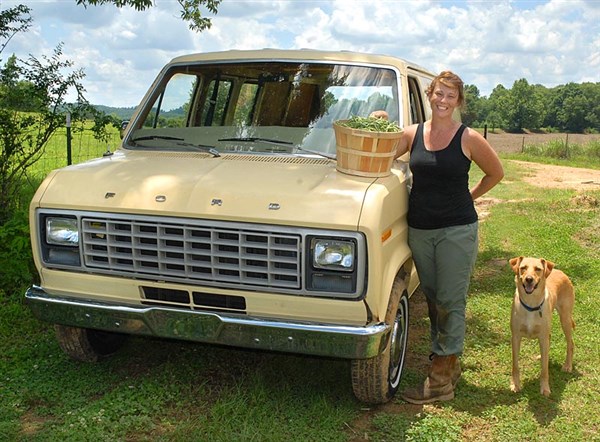 Melissa Ondrovcik poses with her prized 1981 E100 Ford V-8 van and her buddy, Onion, who romps in the fields while Ondrovcik works her naturally-grown Mudline Farm vegetables. – Photos by Jack Gurner 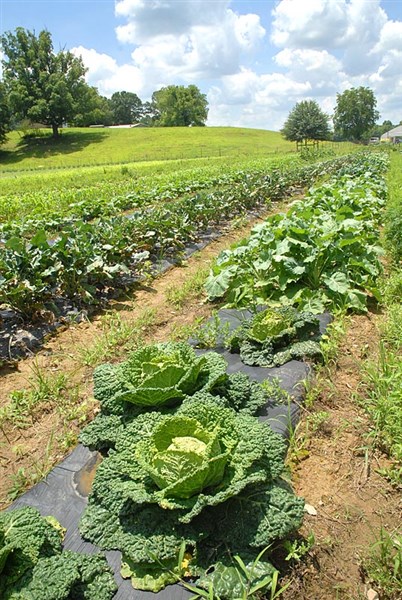 Ondrovcik said that things will get more colorful during the summer CSA season at Mudline Farms. Her produce is all naturally grown (above and below). 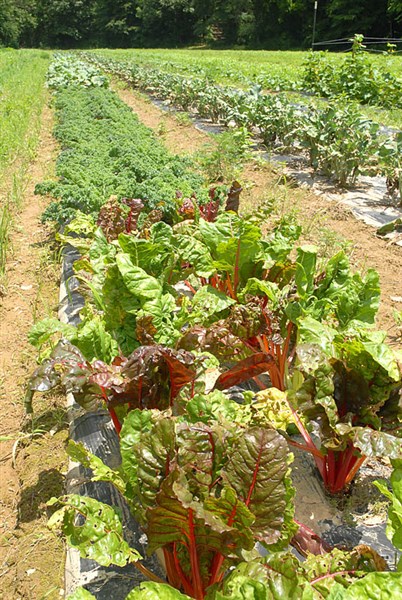 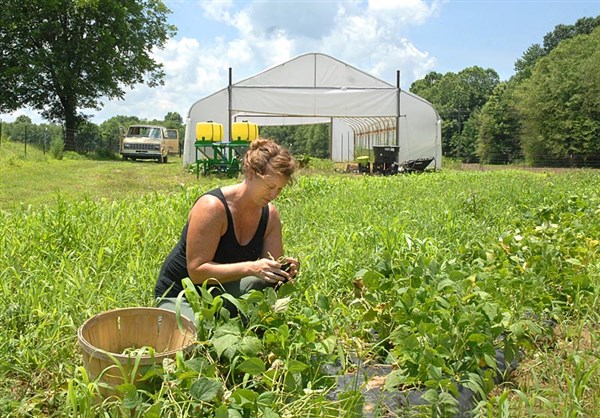 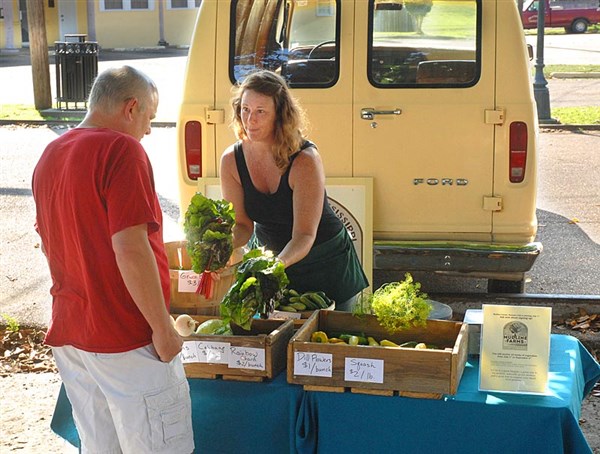 Ondrovcik also sells her produce at the Saturday Farmers Market. 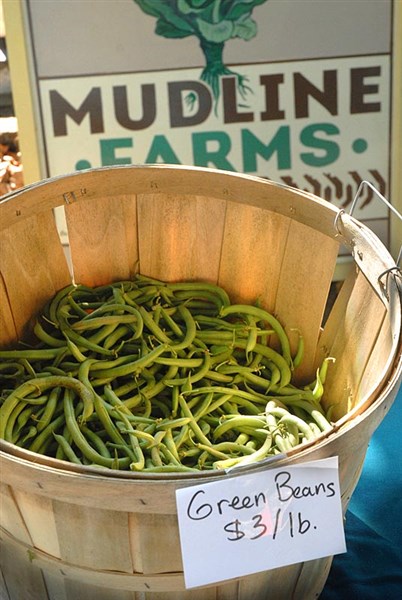 
WATER VALLEY – Melissa Ondrovcik isn’t afraid of a little hard work. In fact, she isn’t afraid of a lot of hard work or even the creepy crawlies that sometimes show up under the plants out on her Mudline Farms.
Ondrovcik, who describes herself as an instructor of German/ farmer, is about to complete her first ten-week CSA season and begin her second. CSA stands for “community supported agriculture,” a new model of farming that has only been happening on a large scale over the past 20 years, she said “It started in the ’70s when people were doing some ‘hippie commune’ stuff. It is a different kind of a business model for farmers.”
She and husband, John, moved to Mississippi three years ago because he got a job with the University of Mississippi as an assistant professor of German history. There’s no “slash farmer” after his name, but there is a PhD from Harvard. Melissa, originally from Wisconsin, was educated at the University of Massachusetts Amherst.
“I had done some farming in Massachusetts during grad school before we moved because grad school is a little too cerebral and I needed to do something physical,” she explained.
So, after moving to Oxford and while she was unemployed, Ondrovcik did some volunteer work on farms. But, that wasn’t what she wanted to do. “Oxford really wasn’t meshing with us. We really wanted a small town that felt like a small town. We wanted a place where I could farm and have a positive influence on the community and it didn’t seem like that was happening in Oxford.”
The couple also wanted to buy a house. “We were growing out of our rental,” she said. “When we came down to Water Valley, we knew it was where we wanted to be.”
“When we saw this house,” Ondrovcik said of her home on Dupuy Street, “we fell in love the second we opened the door. Even though it didn’t have the land in the back that I wanted to use for farming, we easily found land that I could use.”
Friends told her to contact Lee McMinn. “He needed someone to work in his hot house and I needed land. It was a perfect meshing of interests.”
Ondrovcik said that she couldn’t imagine that happening anyplace else but Water Valley. “People are so easy going and so ready to help each other out to get something off the ground. Everyone is sort of cheering for each other around here and I really like that.”
By this time, Ondrovcik had joined the faculty at Ole Miss and was also preparing for her first year of community supported agriculture at Mudline Farms.
She describes the CSA model this way: “A typical farmer will put seeds in the ground that he bought with a loan from the bank at the beginning of the season and that investment doesn’t pay off until the end of the harvest season. Hopefully he grew enough and the season was warm enough and wet enough so that the yield you get is going to pay for the debt that you took in the spring. Hopefully you have a little bit left over to live off of until the next year. It’s kind of a risky business.
“So, in the last 20 years, farmers have come up with this model of having the customers pay for the vegetables up front before the farmer even puts the seed in the ground. It really helps the farmer out. The money that we need is in the springtime. That is when we have all of our expenses.
“A CSA is a group of people who buy a little piece of the farm harvest at the beginning of the year and then the farmer promises for each week of the harvest season to give each customer a share of the harvest. It’s a very economical plan for the farmer and the customer alike.”

A FEW QUIRKS
The CSA model does have some funny quirks, according to Androvcik. “The customer will receive a box of vegetables. But, the only thing they receive is what is growing at the time. So, you really get an idea of what seasonal eating is all about. In the spring, customers ate a lot of lettuce and spinach and kale and lots of green things. In the summertime, that’s when things get a little bit more colorful.
“Sometimes you’ll have a big bushel of green beans one week and then none the next week. So, you see what is coming out of the farm each week. It’s a great way to educate community members of your local agricultural microclimate. I think people like that. I think they like learning about what is growing.”
Ondrovcik said that the disadvantage to one of the old models, truck farming, is that you have a lot of product all at once and you don’t have a guaranteed customer. “So, it’s a really risky business. What the CSA model does is insure that I have a customer base every single week for the produce that comes out of the farm. We do feel the burden that we have to provide for our CSA customers every single week. So far – knock on wood – I have been able to do that.”
She grows her produce naturally, but added that she can’t call her produce organic because that designation requires certification from the USDA. “I use absolutely no herbicides, no pesticides, no fungicides or fertilizers, nothing chemical. All I use are natural methods that an organic farmer would use.”
The natural method is hard work, she noted. “There’s a lot of hand-picking of weeds and hoeing and I pick off bugs one by one. There’s a lot of bending over and getting on my hands and knees and doing the dirty work. That’s what everyone used to do before chemicals were introduced to farming.”
Her work starts in mid-April and runs until Thanksgiving, a 30-week season. And, Ondrovcik teaches while she farms, which includes a four-hour German course this summer. “Two full-time jobs,” she said. “It’s hard. I get really tired. I’m usually in bed by eight o’clock and I’m awake by five – five-thirty. I just gotta’ get it done.”
“Farming is a young person’s game,” said Ondrovcik, who is 36. “I’m doing the best I can. I wake up some mornings and my back is killing me. Yep, that was the beans I spent three hours bending over picking yesterday.”
Farming is also a dangerous game. It is in the top ten dangerous jobs, but she doesn’t dwell on that or the dangers that lurk in her field. She recently posted a pair of photos on Facebook that showed a turtle hiding under a cucumber plant and a cottonmouth moccasin peeking out from under a squash plant. “I think about that, but then you can’t just worry every single day.”

NEW SEASON
Ondrovcik is about to start the second of her three, ten-week seasons. “Starting July first I’ll have a whole new season and I can accept new customers. There are two sizes of CSA boxes. One is about five pounds of vegetables a week, which will easily feed a couple or one vegetarian. That will cost $125. Then there is a ten pound box. It easily feeds a family of four or two vegetarians. And that one is $250 for the ten week season.
She likes to keep the prices competitive with area grocery stores, especially considering that her produce is naturally grown and compares with the higher priced organic produce. “It comes out to about $2.50 per pound. It is not more expensive that shopping at Kroger or WalMart.
For the summer season, Ondrovcik is growing tomatoes, egg plant, peppers, watermelons, honey dews, cantaloupes, cucumbers, all different kinds of squashes, carrots, beets, onions, lots of herbs and there will be “extras here and there and little surprises.”
“Pretty much everything that grows in Mississippi I try to grow; okra, peas… all that good stuff. In the fall, starting in September, I’ll be able to grow that winter garden again.”
For more information, contact mudlinefarms@gmail.com or visit the Mudline Farms Facebook page.