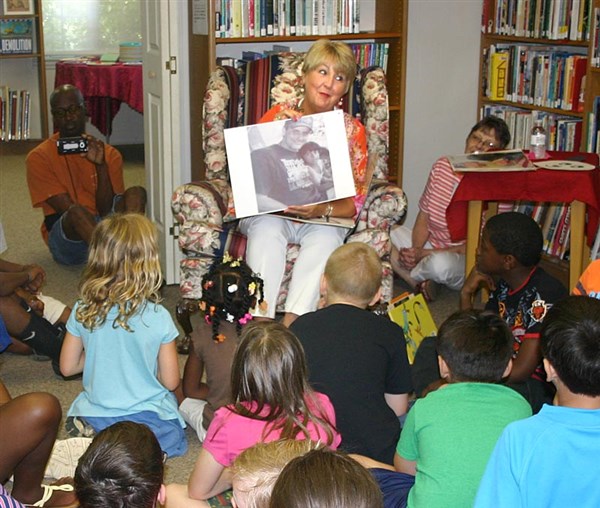 First Lady Deborah Bryant shows pictures of her family during a visit to Blackmur Memorial Library during the kickoff of the summer reading program. The Governor’s wife read the kids two books about panda bears during her visit.


WATER VALLEY – Did you know ancient Chinese rulers liked to keep panda bears as pets? Or that Governor Phil Bryant started his career working at a sheriff’s department in a ground floor position overseeing supplies?
The state’s First Lady Deborah Bryant spent a fun hour interacting with almost 100 youth and adults at Blackmur Memorial Library last Wednesday to help kick off the summer reading program– a program that focuses on different animals for six consecutive weeks each Wednesday starting with the panda bear.
Her stop in Yalobusha marked the 51st county she has visited since January as part of her “Read Across Mississippi” education initiative. Bryant told the Herald she will hit all 82 counties in 2014.
Before reading two books about panda bears, the state’s First Lady introduced the children to her family, using poster size pictures. Holding up the pictures she introduced her two children, Katie and Patrick, the family pet and, of course, the Governor.
The children learned that as a kid, Phil Bryant wanted to be a cowboy. They also learned he likes to hunt and perform mission work.
“Phil was not always governor,” she told the group of kids. “He wanted to be a deputy sheriff. My daddy called him deputy dog,” Bryant told the children.
She also explained her role as the governor’s wife helping promote the state. Using the same poster-sized photos, she showed scenes of her feeding the dolphins on the Gulf Coast and wearing an astronaut suit at Stennis Space Center. She also showed pictures of herself reading books, which she described as her favorite job as First Lady.
“I have been reading for a long time. This is what I love to do because it is so important to read,” Bryant explained. “It makes you smarter.”
The children enjoyed almost 30 minutes of reading time, learning about the panda bear, which typically spend about 12 hours a day eating bamboo leaves.
At the conclusion of the program Bryant donated 31 children’s books to the library, including 30 from Scholastic and one donated by her and the Governor, which he signed. There were also two books donated by the Friends of the Library, who will also be donating books all during the summer in theme with the subsequent animal program.
Librarian Joe Gurner said the program was the biggest in the decade he has worked at Blackmur Library.
“We were very pleased to have the First Lady come and help us kick off our program. It definitely got the library some great publicity and she came in and just did an amazing presentation. We couldn’t have asked for a better start,” Gurner told the Herald.
Gurner credited the Friends of the Library for putting the program together.
“Since the group reformed last year, they have done so much for the library. They’ve been very passionate about getting people in our doors, coming to programs and using the library. We’ve always had great support from the community, but the Friends have really boosted that support more than I could have ever imagined.”