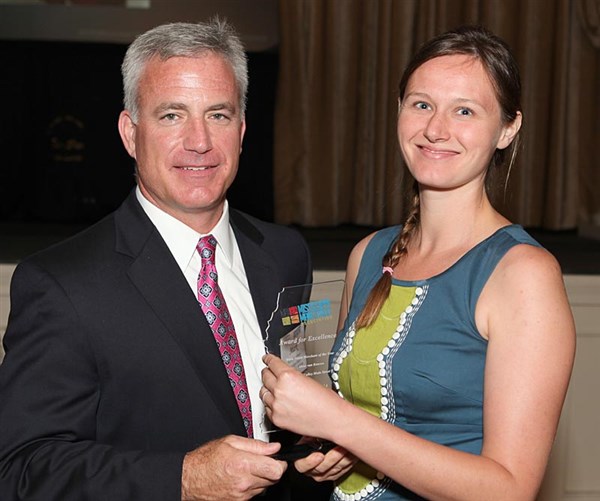 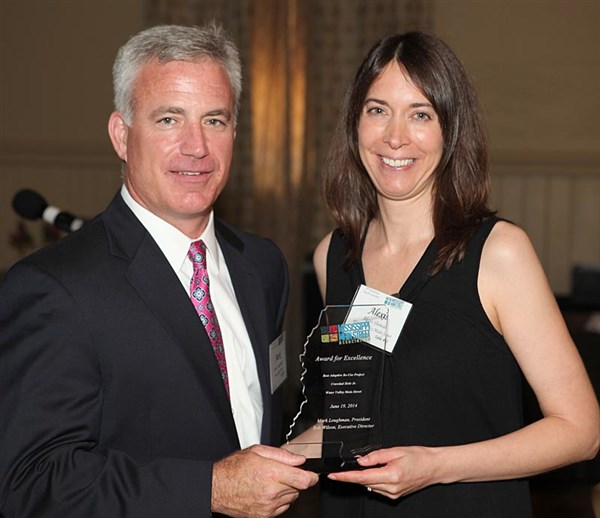 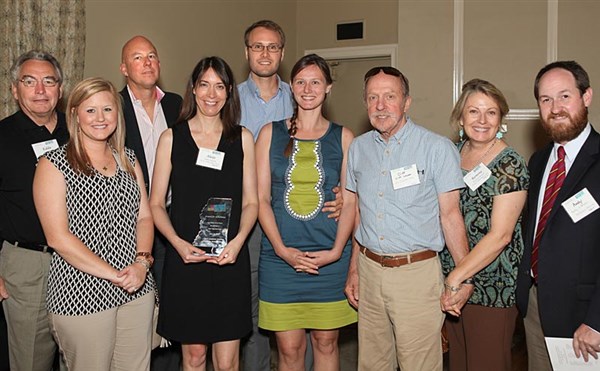 
JACKSON – The Water Valley Main Street Association won two awards at the 25th annual Mississippi Main Street award luncheon including the top honor, Main Street Merchant of the Year.
Mark Loughman, president of the Mississippi Main Street Association board of directors, presented the statewide recognition to the BTC Old Fashioned Grocery’s Alexe van Beuren during the noon luncheon in Jackson.
Loughman also presented the Best Adaptive Re-Use Project award to Alexis Bullock Showah of the Crawdad Hole, Jr.
Mississippi Main Street officials had this to say about the Merchant of the Year: Alexe van Beuren never imagined she would one day sell tomatoes of every hue and variety in a small town in north Mississippi, and love it… most of the time.  Nor could she think that she’d own and work in a 140-year-old building that had been one step away from demolition and think it was great.
But she does and any given day in Water Valley, Mississippi you will find Alexe in that old building selling tomatoes, and doing so much more: buying and picking up direct from the farmers, running the register, handling the phone, serving food, bussing tables, stocking shelves, putting the sign outside, blasting the daily special e-mail, checking the quality control and happy.
Alexe has been named a Top 50 businesswoman in Mississippi and appeared in a feature article in the New York Times. She has written her own cookbook published by Random House–with BTC chef extraordinaire Dixie Grimes.  Alexe never imagined any of this seven years ago when as the first project of the Water Valley Main Street, she started the local Farmers Market. That is how it can work on a Main Street where creative economy is embraced and there is a will to “Be The Change” you wish to see in the world.
This was what they said about the Crawdad Hole, Jr.: The 1933 service station sat abandoned for years on the south end of Main Street, the first historic structure one sees entering downtown Water Valley.
The last owner abandoned it, the bank would not re-possess it, and the owner who bought it sight unseen at the tax auction refused to title it.
Why? No one wanted the possible EPA issues in their name until Alexis Bullock came along. She thought this old gas station was ideal as the place for her first business, a restaurant, and so in a methodical and determined manner, the building and grounds were cleaned, allowing her to purchase it EPA certified safe.
Three years later the pneumatic bell “ding-dings” again as customers walk up past the pumps, but they’re filling up on high-test crawfish and local Yalobusha brew. Crawdad Hole Jr. has been in Food & Wine Magazine and Preservation Magazine as a great place to eat well when you’re in the Valley.
This is not the first time Water Valley has been recognized by the Mississippi Main Street Association. The local group has won numerous awards including another top honor, Main Street Manager of the Year, which was presented to the group’s director, Mickey Howley, in 2012.
Along with the honors, Water Valley was also represented by Yalobusha Brewery, one of the sponsors of the event. For additional information, see Howley’s Street Talk column on page 4.