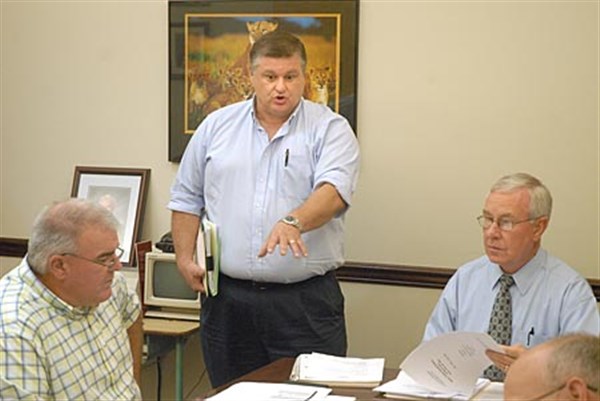 While Steve Brown of Wellington Associates delivered a rate increase for the school district’s, he said the school’s claim rate is among the lowest in the state. 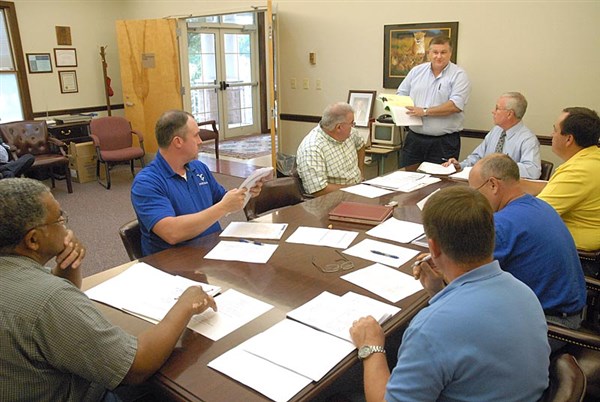 School’s Insurance Is Going Up, Again


WATER VALLEY – The cost of insurance for the Water Valley School District is going up this year by about $9,000 after a $20,000 increase last year.
“But,” as district business manager Randy Goodwin pointed out, “Nobody wants to insure a school.”
The insurance discussion came during a presentation Monday night by Steve Brown of Wellington Associates, one of the few companies offering coverage for school systems.
Brown presented the numbers starting with 2011, when the district’s insurance was $57,000. The following year, it went up to $67,000 and in 2013, it rose to $93,000. “Last year was a horrible year for insurance,” Brown said.
He explained that the company insuring the school over the period was CNA insurance, a company brought into Mississippi by Brown’s company. CNA insured about 60 school districts and collected about $16 million in insurance premiums. But, over the three years, they paid out over $60 million in claims. “They bugged out,” said Brown. “They didn’t want anything to do with public entities in Mississippi. Just a bad run of luck with the storms and all that.”
Brown went on to explain that Water Valley School District is lucky because it is one of the best insurance risks among school districts in the state. “Y’all take care of business. You don’t have a lot of crazy things that happen. Everything’s in good shape…knock on wood.”
He noted that the largest increase for Water Valley was about $4,000 for property insurance followed by a $3,000 increase in general liability. The educator’s legal liability coverage went up about $1,000, he added.
Along with the low quote of $102,000 for Hartford, Brown presented a $158,000 quote from the Mississippi School Board Association and an $118,000 quote from Liberty Mutual.
Trustee Casey Washington, who had questioned the increase, made the motion to accept the Wellington Associates quote from Hartford. Bryan Gilley made the second. The vote was unanimous to accept the quote.
Among other actions at the June 23 meeting, trustees:
• Approved a donation from the Baseball Diamond Club.
• Approved changes to the 2014-2015 Alternative Learning Center handbook.
• Accepted a bid from Hill’s Construction to repair the canopy at Davidson Elementary School.
• Approved the claims docket.
• Heard a financial report from Goodwin. The all-important fund balance was $1,641,716.07 as of May 31. Goodwin reminded board members that the budget hearing date was Tuesday, July 8, beginning at 6 p.m. in the board room. The public is invited to the hearing.
The next regular meeting of the school district board of trustees is set for Monday, July 7, beginning at 6:30 in the district office board room.

School Board Splits On Change Order For Painting Inside Windows


WATER VALLEY – School board trustees split on a vote to authorize a change order for the window replacement project at the high school.
Trustees voted 3-2 to allow the change order to the contract with Hill Construction Company that would add almost $7000 to the cost of the project.
Superintendent Kim Chrestman explained to board members that the change order covers painting around the inside of the 137 windows, which was left out of the original bid specifications.
Trustee Pierce Epes said, “This is one of those things that should have been obvious to the contractor that they had to do.”
After a brief discussion of getting someone else to do the painting, trustees agreed that because of time constraints, it would be best to approve the change order.
“I’ll make the motion to do it,” said trustee Casey Washington. “I’m not happy about it, but I don’t think we have a lot of choice because of the time.”
Trustee Bryan Gilley agreed to second the motion and he, Washington and Board President Lamar Burgess voted to approve the change order. Trustees Taylor Trusty and Epes voted against.
The motion passed. But, Burgess added, “That sends a message.”


There is controversy brewing over the Common Core State Standards (CCSS) at the National and State level.  CCSS was originally designed as a state-led initiative that each state could choose to voluntarily adopt.  At present, CCSS is being touted as a federal overreach and attempts to federally control curricula, testing, and teaching practice.  Several states have taken action against CCSS.  Actions in Oklahoma, South Carolina, North Carolina, Louisiana, Missouri, Ohio, and Indiana could put the implementation of CCSS at risk.  Even Mississippi’s Governor Bryant has made negative comments about CCSS and hinted of withdrawing from the CCSS implementation.
Dr. Wayne Gann, chairman of the Mississippi Board of Education, and Dr. Carey Wright, state superintendent of education, issued statements today regarding comments from Gov. Phil Bryant about Common Core State Standards.
“On behalf of the State Board of Education, I want to express our disappointment in the comments Gov. Bryant has made about the state’s higher standards for learning. When Board members voted to approve the standards four years ago, we knew that this was an opportunity to provide students with the high-quality education that they deserved so they can be better prepared for college or direct entry into the workforce with the knowledge and skills to succeed,” Gann said. “While Mississippi had made some improvements in education over the years, it was obvious that the state’s former standards would not be enough to move us from the bottom of every national measure of education outcomes. It is our hope that our students’ futures are not placed in jeopardy for political expediency.”
“It is a gross mischaracterization to call the standards a ‘failed program’ when Mississippi and other states have yet to give the first test aligned to the standards. The state is still in the implementation phase, and to remove the standards now would be disheartening to the district and school leaders and teachers who have invested time and resources in this effort. Ultimately, our students are at the heart of everything we do, and they are as capable and smart as students in other states. They deserve the opportunity to perform to higher expectations, and we believe the standards adopted by the Board will provide that,” Wright said.
Construction is continuing at Water Valley High School with the replacement of the window AC units with new HVAC systems (Tri-Star Construction) and the replacement of the windows (Hill’s Construction) with more energy efficient windows and panels.   Construction is planned to be completed by August 1, 2014.
Marchbanks Construction is in the process of replacing the roof on the 5th & 6th grade building at Davidson Elementary School this summer.  Construction will be completed prior to school starting.
Water Valley School District would like to invite the faculty and staff of Davidson Elementary School to meet and greet Mr. Brad Parker (DES Principal) and Ms. Sharron Lipsey (DES Assistant Principal), new DES Principals for 2014-2015, June 30, 2014 from 10:00 – 12:00 a.m. at the DES Cafeteria.  Light snacks will be provided.
Next School Board Meeting is July 7, 2014.  WVSD Budget Hearing will be at 6:00 pm at the WVSD Central Office Board Room on July 8, 2014.