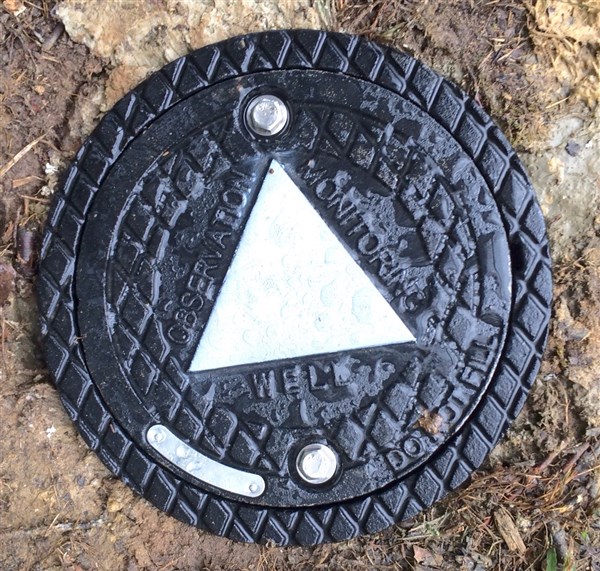 This eight inch well was installed on city-owned property near Crawford Sports Complex to test to ensure that the contamination has not crossed O’Tuckolofa Creek.

WATER VALLEY – Another round of testing was completed last month for the decades-old chemical release site at the former Colt Industries/Holley Carbure-tor facility. The work was performed by EnPro Industries, the company that acquired liability for the contamination for the site in 2002.

“EnPro has had consultants out there the last several weeks doing ground water monitoring events,” MDEQ Branch Chief Willie McKercher told the Herald last month. The work included sampling from more test sites than previously tested back in the spring and the addition of some new wells as work continues.

“There were several wells out there they haven’t taken samples from in a long time,” McKercher added.

Since the release of trichloroethylene (TCE) commonly used as an industrial degreaser, the chemical has crept toward O’Tuck-olofa Creek in an area the Mississippi Department of Environmental Quality (MDEQ) describes a plume that spans an area north of the industrial site where BorgWarner is located. The plume includes an estimated 28 residences and 11 commercial buildings on portions of South Main Street, Frostland Drive and Champion Circle. The contaminated area includes the county-owned hospital and nursing home and Department of Health building on South Main.

After years of no activity in the contaminated area, scrutiny at the site resurfaced in February after MDEQ obtained an order from the Mississippi Commission of Environ-mental Quality requiring EnPro Industries to formulate a remediation plan to address vapor intrusion and ground water contamination. After the order was issued, MDEQ had a public meeting February and again in March in Water Valley and reported their renewed presence was prompted due to new vapor intrusion guidelines implemented by the Environmental Protection Agency in 2015.

During the March meeting, MDEQ Executive Director Gary Rikard explained vapor intrusion is the process where vapors from underground solvents travel upward through the soil. The potential problem is TCE entering a home or residence and be inhaled. TCE is a known carcinogen and causes toxic effects to the kidneys, central nervous system, liver, immune system, male reproductive system and a developing fetus.

Testing back in the spring indicated there was no immediate health threat from the decades-old spill, but MDEQ had promised another round of testing would be conducted in the summer months when there is less moisture in the soil.

At the March public meeting, McKercher explained the goal is a 10-year remediation plan that will be implemented by EnPro Industries to reduce the levels of TCE in the soil and water to a level that is non-detectable or below the agency’s screening level.

McKercher told the Herald last month the plan is moving forward, and the latest samplings will help EnPro Industries finalize the plan and send it to MDEQ for approval. He also said the actual remediation could start in early 2017.

“We are a little behind,” McKercher added, explaining that EnPro’s consultants were having some issues accessing some properties to conduct the sampling. The access issues stem from potential litigation that is pending on the matter after a number of private property owners, Yalobusha County and Yalobusha Health Services have signed on with a group of plaintiff attorneys for a potential lawsuit against EnPro Industries.

“It was requested by the plaintiff attorneys that MDEQ have people present all times, so that we can witness the sampling and make sure everything is consistent,” McKercher explained, referring to properties that are included in the lawsuit.  “This is not something that we do in every case, but the property owners, through their attorneys, made it a request that MDEQ be there.”

McKercher also said the latest test results will be made public as soon as they are available. MDEQ has a link on their website’s (deq.state.ms.us) homepage, “EnPro Industries, Inc., Water Valley” where information is posted as it becomes available.