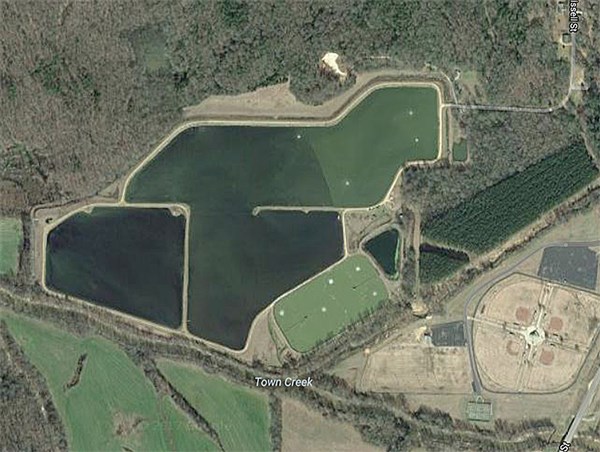 The City of Water Valley’s wastewater treatment plant is located on the south end of town, across from the sports complex. The bottom, lighter-colored lagoon is where the wastewater from Water Valley Poultry is initially treated.

WATER VALLEY – Unusual January weather and multiple downed aerators at the City of Water Valley’s wastewater treatment plant was the culprit in the strong odor many residents noticed during January.

Mayor Larry Hart explained that the problem originated at the lagoon used to treat the wastewater from Water Valley Poultry, which only had one of five aerators operable for several weeks. By the end of last week, three aerators were running and Hart reported the problem should be resolved.

“There are three back in service, they were looking for a component to repair a fourth aerator and will probably have to purchase a fifth aerator,” Hart told the Herald. The mayor also explained that Water Valley Poultry, LLC, commonly called the chicken plant, is responsible for maintaining the equipment at the lagoon used to treat the discharge from the plant. He also stressed the importance of the plant properly treating their wastewater before it is delivered into the lagoon, described as the polishing cell.

Hart said a lightning strike may have been the culprit in the failure of multiple aerators, acknowledging that the problem should have not been as prolonged as it was.

“We want that plant to perform properly because it supplies much needed jobs in the community,” the mayor also explained, adding that the plant employs around 130 workers.  He also said the plant is one of the city’s largest utility consumers in the community, using almost $35,000 to $40,000 in water alone each month.

In 2015, the poultry plant was investigated after the Mississippi of Environmen-tal Quality received a complaint that 40,000 pounds of chicken parts were buried at the facility, and concerns about the waste floating into nearby Otoucalofa Creek.

Plant manager James Waits acknowledged the waste was buried after a spill at the plant, according to a 2015 Clarion Ledger article.

Water Valley Poultry was also fined $45,500 for violating ammonia discharge limitations in its wastewater during several months in 2014 – the same wastewater that runs into the city’s sewage treatment plant.

Dennis Truax, James T. White chair and head of the department of civil and environmental engineering at Mississippi State University told the Clarion Ledger that high levels of ammonia can be harmful to aquatic life and humans and can cause a treatment system to fail, resulting in potential fines for the city.

“The second issue would be that in the failure of the treatment plant, it would likely create offensive odors that would be objected to by nearby residents,” Truax also told the Clarion Ledger in the 2015 story about the high ammonia levels recorded in 2014.