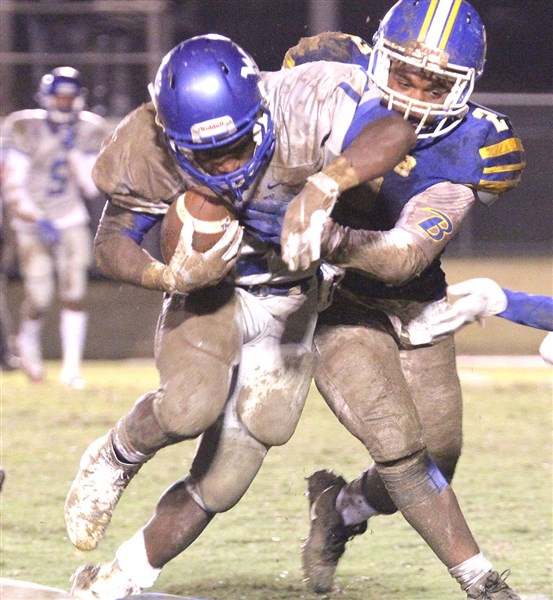 Tay Rucker (above) finished the night with five touchdowns on the ground. Cedric White and Javarius Benson combine for the tackle (below). – Photos by Leslie Brooks

Playing on the road, the win propelled the Blue Devils to the third round of the playoffs where they’ll face the Houston Hilltoppers (11-1) in another away game at Houston this Friday night. Houston defeated M.S. Palmer 14-12 to advance to the third round.

In the battle of the Blue Devils, neither team could get anything going offensively in the first quarter as the teams took a couple drives to get used to the muddy conditions, leading to a scoreless first quarter.

Water Valley got on the board first with a five-yard rushing touchdown from the always reliable Tay Rucker. The score gave Water Valley a 7-0 lead midway through the second quarter.

Booneville would answer on the following drive as L.J. Shumpert found the endzone from one yard out to tie the ballgame up at 7-7 with 3:40 left in the second quarter.

Water Valley would respond in a big way before the half. Facing third and long near the 20-yard line with less than a minute remaining in the half, quarterback Blayne Clark found Jacob Welch for a gain of 19 yards setting up a first and goal at the one yard line.  Rucker would cap off the big drive with a one-yard touchdown run to give the Blue Devils a 14-7 lead heading into the half.

The Water Valley rushing attack would lead a punishing six minute touchdown drive to open the second half and extend their lead out to two scores. Rucker finished the dominant drive off with an 18-yard rushing touchdown, his third on the night.

Rucker wouldn’t stop there, the senior tailback would strike again on the following Water Valley offensive possession. This score came from 17 yards out, giving Water Valley a 28-7 lead with 11:54 left in the fourth quarter.

Booneville would find the endzone on the following possession as their talented running back Dallas Gamble caught a pass and took it 40 yards for the score. Gamble’s touchdown shrunk the Water Valley lead to two scores.

Rucker would put the game away late in the fourth quarter scoring his fifth touchdown of the night, as he found the endzone from nearly 30 yards out to give Water Valley a 35-14 lead with 1:22 left in the ball game.

For the second straight week the Water Valley defense would place the final nail in the coffin, as Bud Tolbert intercepted a pass and took it back for a touchdown as time expired. The interception return gave Water Valley a 41-14 victory over Booneville.

The big win puts Water Valley into another highly anticipated matchup in the third round. The Blue Devils will take on the Houston Hilltoppers in a matchup of teams that have had a lot of success in the ground game this season. Houston is led by Jalen May, a dynamic athlete that has piled up 1,776 rushing yards for the Hilltoppers this season.