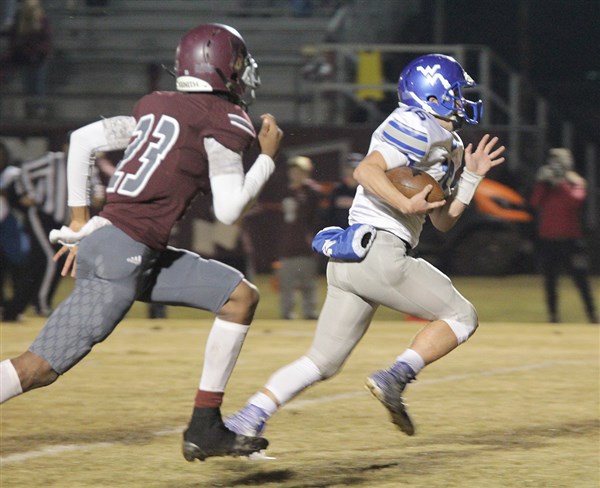 A 26-yard run by Jacob Truss marked the first score in the game. The Blue Devils have struck first in 12 of the 14 games played this season. Truss was selected the State Farm Offensive Player of the week.

Houston – With a spot to compete in the 3A North Half Championship on the line, the Blue Devils (12-2) were able to hold the explosive Houston Hilltopper’s offense to only eight point en route to a big 20-8 win in the third round of playoffs.

The effort marked the third week in a row that Water Valley’s defense had a dominant performance, as they forced eight turnovers (six fumbles and two interceptions) to pick up a Blue Devil victory in playoff action.

The outstanding defensive output along with some opportunistic offense gave Water Valley a 20-8 win over a talented Houston Hilltopper (11-2)  team, and now has the Blue Devils one win away from their first state championship appearance in 28 years.

The Blue Devils got on the board first for the 12th time this season out of the 14 games as Jacob Truss kept up his solid postseason play scoring on a 26 yard touchdown run. The score gave Water Valley an early 6-0 lead with 7:41 left in the first quarter.

The Blue Devils would miss a couple of golden opportunities to extend their lead late in the first quarter, fumbling twice inside the Houston five yard line. Water Valley would finally break through again midway through the second quarter with another Truss’ second touchdown of the night on a five yard run extending the Blue Devil lead to 13-0.

The Water Valley defense would expand their streak of scoring a defensive touchdown to three games as Damicah Hervey picked up a Houston fumble and carried it 60 yards for the score, silencing the Houston faithful near the end of the first half. Water Valley would carry a 20-0 lead into the half.

Houston would finally break through the stingy Water Valley defense midway though the fourth quarter as Jalen May found the endzone on a four-yard touchdown scamper. The late score would make the final score a little closer than the game ever seemed, with Water Valley earning the 20-8 victory, their third straight road playoff win.

The Blue Devils’ win sets up a rematch with North Panola (12-1) in the 3A North Championship Game. The Cougars defeated Charleston 14-0 to advance to the title game. Water Valley will be on the road yet again as North Panola is the host due to earning the 1 seed out of Region 2-3A.

North Panola defeated Water Valley 52-19 in the regular season finale four weeks ago to win the Region 2-3A Title. The Blue Devils carried a 19-18 lead into the half, but were outscored 34-0 in the second half to lose convincingly.