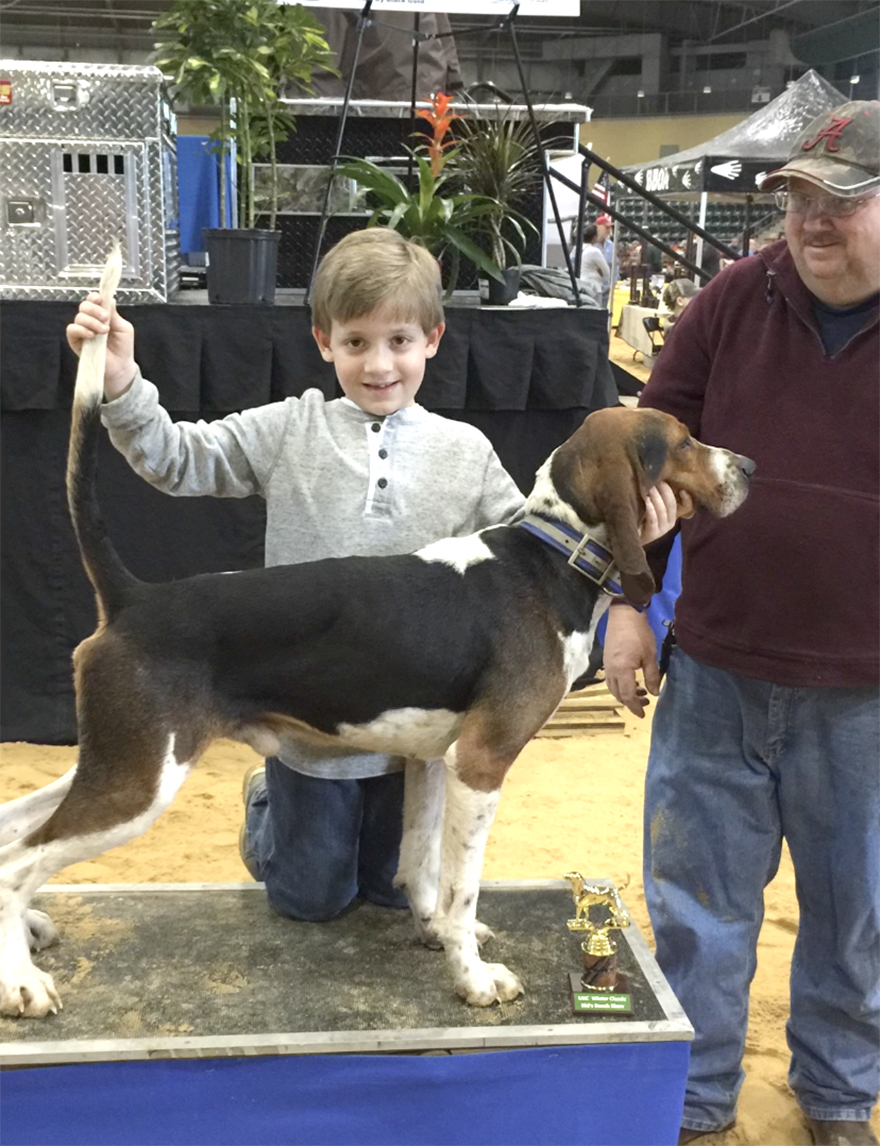 Devin Bailey is pictured in the kids’ bench show during the UKC Winter Classic in 2016. Ronnie Stark, (right) vice-president of the Mississippi Raccoon Hunter’s Association, reports that plenty of dogs will be available at the youth hunt scheduled in Coffeeville for kids to show.

COFFEEVILLE – Get your kids ready to enjoy an action-packed day (and night) of fun with the Mississippi Raccoon Hunter’s Association UKC Youth Hunt in Coffeeville on Dec. 4. It doesn’t matter if you have never seen a coon dog or have spent hours in the woods listening to a hound sing, the event will be an exciting outing for everyone. The fun gets underway at noon at the Multi-Purpose Building and will stretch into the night with a lineup that includes a drag race, coon squaller competition, bench show, treeing contest and night hunt.

“Our association is committed to growing the future of the coonhound world by helping get youth involved in the sport,” Mississippi Raccoon Hunter’s Association Vice-President Ronnie Stark explained. “And the best part is that we are going to have plenty of dogs for the kids to show and work so they can see what this sport is all about.”

The event starts at noon and hamburgers and hotdogs will be served. All food and events are free for youth attendees. The afternoon events will be held at the arena inside the Multi-purpose Building. Guest speaker Steve Fielder will share the importance of good sportsmanship and winning the right way at 3 p.m. The UKC licensed bench show starts at 4 p.m. as kids are invited lead the dogs in the arena and pose them for the judges. The judges will also select a winner in the coon squalling competition as kids blow the squaller to see who can make the most realistic sound.

The night hunt gets underway at 6 p.m and youth participants will have the opportunity to accompany hunters as they head into the woods and turn the dogs loose. The kids will be handling the dogs and will call when the dogs strike a track and again when a raccoon is treed. No coons are killed in competition hunts.

“We are going to supply the dogs from area hunters. Kids who don’t know about competition hunting can accompany the hunters to spectate,” Stark explained.

Youth who plan to participate in the night hunt will need to bring warm clothes, boots and a light.

Stark also reported that this is the first time the annual hunt will be held in the north part of the state in several years. He added that typically youth hunters come from across Mississippi and even neighboring states to participate.

“If we can make this a big success, we may be able to host it in Coffeeville again,” Stark added. “Hopefully it will be an event that people look forward to each year. It is important to introduce kids to hunting and there is nothing like being out at night seeing the dogs work.”