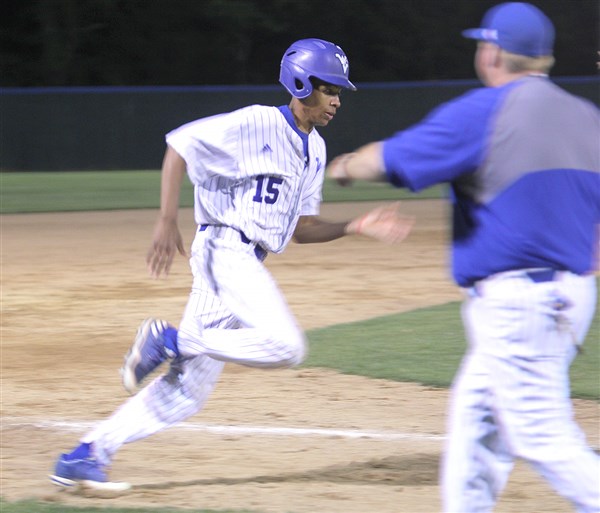 Dalen McGee rounds third as he heads home to add a run to the Blue Devils’ lead over Charleston last Friday. Water Valley won a pair of games against the division rival, clinching a number two seed.

WATER VALLEY – The Blue Devils (7-12)(3-1) locked up the number 2 seed from Region 2-3A for the MHSAA playoffs that will begin later this month. The Blue Devils clinched the spot with two wins over the Charleston Tigers in a doubleheader on April 7.

The Blue Devils defeated the Tigers 13-3 in the first game and 21-6 in game two.

Water Valley got the offense going late in game one, scoring seven runs in the fifth inning to defeat the Tigers 13-3. The Blue Devils were led by Dre McCray, Ty Varner, and Chapel Hyde who all finished with two hits. Water Valley had several players with two RBIs versus Charleston, including Blayne Clark, Ty Kuykendall, Varner and Martavis Rockette. The win improved the Blue Devils to (6-11)(2-1) on the season.

Water Valley would use the momentum gained at the end of game one, to come out and defeat the Tigers 21-6 in game two. The Blue Devils were led by McCray and Grant Burress with 4 hits and 3 hits respectively. The pair also added 3 RBIs each to lead the team to a 21-6 division win. Clark added 2 RBIs as he finished the game with a double and triple, Kuykendall, Varner and Rockette also added two RBIs for Water Valley. Brennon Peacock and Chapel Hyde pitched in a RBI each for the Blue Devils .
Following the division sweep of the Charleston Tigers, the Blue Devils hosted the South Pontotoc Cougars for a non-division matchup on April 8th.

Water Valley jumped out to an early 1-0 lead, but was unable to pull off the win as South Pontotoc pulled away with a five-run fifth inning, to defeat Water Valley 5-3. The loss dropped the Blue Devils to (7-12)(3-1) on the season.

Water Valley will be back in action on April 14th, as they travel to take on the Senatobia Warriors. The Blue Devils have three games remaining before they begin the playoffs next week.